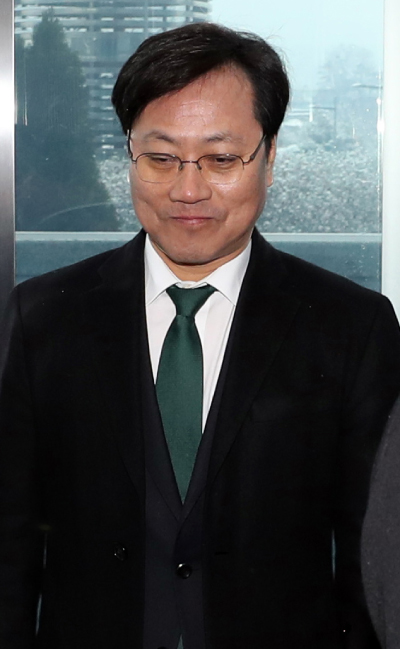 The politician-turned-CEO of the Korea Railroad Corporation, better known as Korail, stepped down on Tuesday to take responsibility for a bullet train that derailed in Gangneung, Gangwon, on Saturday.

Oh’s leadership of Korail had been challenged from day one by opposition political parties, who argued that a political appointee with limited experience in managing railways was unfit to oversee safety issues.

His departure follows a series of railway accidents in recent months, the latest of which occurred Saturday when a KTX bullet train careened off its tracks near Gangneung Station, injuring 14 people.

In a resignation speech given at the Korail headquarters in Daejeon, Oh apologized for not being able to “uphold Korail’s mission to defend the safety and lives of citizens” - a promise he made in his inaugural address as CEO in February. “All responsibility lies with me as CEO,” Oh said. “I ask the people to not lose faith and confidence in the 27,000 Korail employees who are putting their lives into running our railways.”

During his tenure, Oh oversaw operations during the PyeongChang Winter Olympics last winter, which were without major problems, and responded to the Moon Jae-in administration’s labor policy by bringing back some laid-off employees.

But the opposition’s misgivings about him appeared to be validated in the last two months, in which a total of eight accidents occurred. Two mishaps in Busan and North Chungcheong last week, which occurred in part due to human error, prompted both Prime Minister Lee Nak-yon and Transport Minister Kim Hyun-mee to dress down the Korail management.

After the KTX derailing in Gangneung, the opposition called for Oh’s head. Even after his resignation Tuesday, lawmakers from the Liberty Korea Party (LKP) blasted his resignation speech, in which he cited major layoffs and a move to privatize the company by the previous administration as the source of its current problems.

Lawmakers also claimed that Oh was only one of a string of appointees who helm major government institutions and public companies without proper qualifications.

A JoongAng Ilbo investigation found that eight out of 14 public agencies responsible for safety and disaster management as defined by the Interior Ministry are headed by appointees with little experience in the field or left empty altogether.

Another such figure is Hwang Chang-hwa, current CEO of the Korea District Heating Corporation, a public company responsible for providing heat to thousands of households in the country through a massive system of insulated pipes that move boiling hot water.

The company was at the center of a tragedy last week after one of its underground pipes burst in Goyang, Gyeonggi, leading to an eruption of boiling water that killed one man and scalded over a dozen.

Hwang, also a DP associate with no prior experience in the energy sector, added fuel to public ire over the incident after he snickered during an on-site briefing last Wednesday, which he was forced to apologize for the following day.

“These cases teach us that in terms of managing infrastructure linked to public safety, professionals and those with experience should be in charge,” said Lee Chang-won, a public administration professor at Hansung University. “The government should consult relevant experts before picking people for such jobs if they want to avoid controversies over competency.”