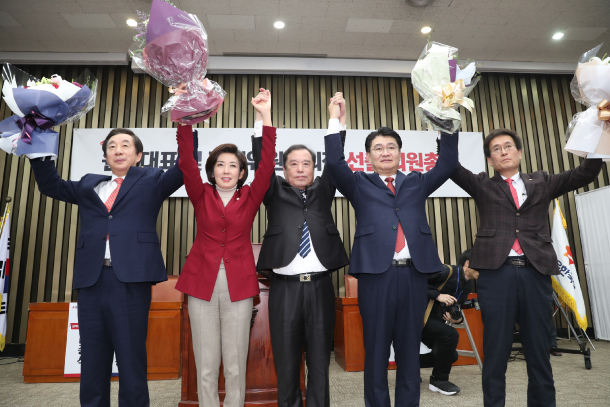 Four-term lawmaker Na Kyung-won was elected as the new floor leader of the conservative Liberty Korea Party (LKP) on Tuesday.

Her election comes as the party is struggling to regain public trust two years after former President Park Geun-hye’s impeachment.

Na, 55, a former judge who represents the Dongjak B District in southern Seoul, was elected as the LKP’s first female floor leader. She won a landslide victory over Rep. Kim Hack-yong, a three-term lawmaker from Anseong, Gyeonggi. Na earned 68 votes from party members while Kim only received 35, defying local media speculations that the result would be neck-and-neck.

LKP insiders said that Na, though she is not pro-Park herself, mostly won approval from pro-Park lawmakers within the party, as well as those who are not affiliated with the pro-Park or anti-Park sides. One LKP lawmaker who only wished to identify himself as a representative of a district in the Daegu and North Gyeongsang regions, a conservative stronghold, said many lawmakers chose Na, not because they preferred her, but because they were against the expanding power of Kim’s faction within the LKP. Tuesday’s vote was by secret ballot.

Kim was among 13 LKP lawmakers who rejoined the party in May 2017, just a few days before the presidential elections that put Moon Jae-in in the Blue House. Kim, at the time, abandoned the now-disbanded Bareun Party and its underdog presidential candidate Yoo Seong-min to declare his support for Hong Joon-pyo. With that announcement, he re-entered the party. The Bareun Party was launched on Jan. 24, 2017 by former Saenuri Party lawmakers who were disgruntled with pro-Park lawmakers’ unwavering loyalty to the former president. The Saenuri Party later changed its name to LKP in an attempt to distance itself from the embarrassing political scandal.

On Tuesday, Na said that after she was named the LKP’s new floor leader she would unite the conservative party as one and block Moon’s “maladministration.”

In the latest weekly Realmeter poll tracking the approval ratings of Moon and South Korea’s political parties, 24.7 percent of respondents said they favored the LKP, lower than the ruling Democratic Party’s 38.2 percent.

During a radio interview with YTN on Tuesday morning, outgoing LKP floor leader Kim Sung-tae denounced Moon for paying most of his attention to North Korea and Kim Jong-un at the cost of the domestic economy.

“He says peace is the economy,” the LKP’s Kim said in reference to Moon. “But North Korea can’t mess with us because we’ve become one of the 10 largest economies in the world. Our confidence that we can lead North Korea to the path of peace comes from this very economic power.”

The ex-floor leader urged Moon to change his Korean Peninsula peace roadmap, stressing that “the economy is peace.”

On the same day during an LKP meeting, however, Rep. Kim praised Moon for building trust with the North Korean leader, adding he hoped the bond ultimately leads to North Korea’s denuclearization.