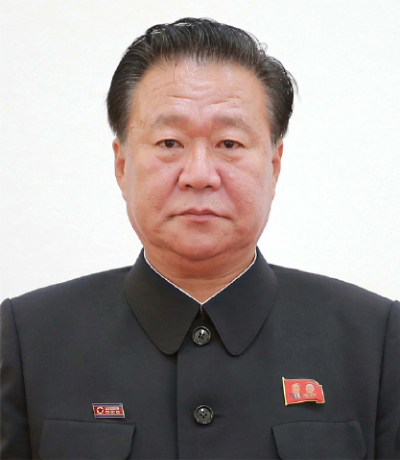 Washington on Monday announced sanctions on three North Korean officials linked to human rights abuses or censorship in the country including the powerful Choe Ryong-hae, considered a right-hand man to leader Kim Jong-un.

Along with Choe, who is director of the North’s ruling Workers’ Party’s Organization and Guidance Department, the U.S. Treasury Department sanctioned Minister of State Security Jong Kyong-thaek and Pak Kwang-ho, director of the Workers Party’s Propaganda and Agitation Department.

The Treasury described Choe as the No. 2 official in North Korea “with control over the party, government, and military.” It added that the Organization and Guidance Department, a powerful oversight body previously sanctioned by the Treasury, “is instrumental in implementing censorship policies, and purports to control the political affairs of all North Koreans.”

Choe is also a vice chairman of the Executive Policy Bureau of the Central Committee of the Workers’ Party.

Jong was designated by the U.S. Treasury’s Office of Foreign Assets Control for playing “a role in directing the censorship activities and abuses perpetrated” by his ministry, which is said to have responsibility for “an abuse or violation of human rights” by the North Korean government and the Workers’ Party.

Pak, whose department oversees all state media, was said to have been involved in “maintaining ideological purity” and “furthering the suppression of freedom of speech, expression, and censorship” in the country.

The Treasury Department said that the latest action serves “as a reminder of North Korea’s brutal treatment of U.S. citizen Otto Warmbier.” Warmbier, a University of Virginia student who was detained in North Korea in early 2016, died days after his release in June 2017 in a vegetative state. Warmbier would have turned 24 years old on Dec. 12, the Treasury Department noted.

“[The] Treasury is sanctioning senior North Korean officials who direct departments that perpetrate the regime’s brutal state-sponsored censorship activities, human rights violations and abuses, and other abuses in order to suppress and control the population,” said U.S. Treasury Secretary Steven Mnuchin in a statement. “These sanctions demonstrate the United States’ ongoing support for freedom of expression, and opposition to endemic censorship and human rights abuses.”

In his State of the Union Address in January, which was attended by Warmbier’s parents and a North Korean defector, U.S. President Donald Trump pledged to “honor Otto’s memory with American resolve.”

The sanctioned individuals’ assets in the United States are frozen, and Americans are prohibited from engaging in transactions with them.

The sanctions came on International Human Rights Day and amid stalled denuclearization talks between the Pyongyang and Washington. Trump has said a second summit with North Korean leader Kim Jong-un is in the works for early next year, but Pyongyang has been unresponsive to working-level and high-level meetings in recent weeks.

Analysts say the latest measure could be Washington signaling to Pyongyang that it will not wait forever and pressuring the North to return to dialogue if it doesn’t want to see even more sanctions.

On the same day, the U.S. State Department’s Bureau of Democracy, Human Rights, and Labor released its “Report on Serious Human Rights Abuses or Censorship in North Korea,” identifying people involved in serious human rights abuses and censorship in the country.

It said that Jong is “involved in directing abuses committed in the political prison camp system,” where there is systematic torture, deliberate starvation, forced labor and sexual violence.

“The report represents a continuation of U.S. government efforts to name those responsible for or associated with the worst aspects of the North Korean government’s repression,” said Robert Palladino, a deputy spokesman of the U.S. State Department, in a statement Monday, and is a part of Washington’s “continued efforts to promote accountability for North Korean officials.”

The latest report, submitted to Congress, is keeping with the North Korea Sanctions and Policy Enhancement Act of 2016 passed by the Barack Obama administration. Kim Jong-un and Kim Yo-jong, the younger sister of the North Korean leader, were previously sanctioned by the U.S. Treasury for human rights abuses.

North Korea has reacted sensitively to the international condemnation of its human rights conditions, especially in the United Nations. A South Korean Foreign Ministry official said Tuesday on the release of the U.S. State Department report and the new sanctions, “On the North Korean human rights issue, our government will join with the efforts of the international community to substantively improve the rights of the North Korean people.”