The LG Twins may have failed to find success in recent years - they haven’t reached the postseason since 2016 - but they have found a new star player, Chae Eun-seong. 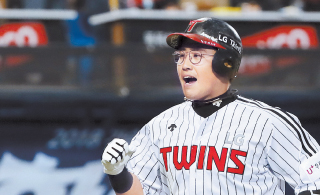 Chae Eun-seong celebrates after hitting a home run during a game against the NC Dinos at Jamsil Baseball Stadium in southern Seoul on May 23. [NEWS1]

Chae finished the 2018 season with a .331 batting average, 25 home runs and 119 RBIs from 139 games. This was his best season since he made his KBO debut in 2009. Not only was it his personal best season, Chae’s home runs and RBIs were good enough to make him the best on the Twins’ roster.

Chae even won the KBO’s most improved player award.

“This is my first time at an awards ceremony,” Chae said. “I feel awkward, but it feels good.”

Before the 2018 KBO season started, Chae’s position was uncertain. In 2016 Chae got onto the Twins’ starting roster with a .313 batting average, but due to a disappointing .267 batting average in 2017 he slowly lost his spot as a starter.

“Before the season started, my goal was to get onto the starting roster because we had a new manager and I played poorly during the previous season,” Chae said. “So I tried my hardest from spring training.”

Despite the concern, Chae was one of the leaders in the Twins’ batting lineup, along with Kim Hyun-soo, throughout the 2018 season.

As a high school player at Suncheon Hyocheon High School in Suncheon, North Jeolla, Chae was signed by the Twins as a training player. Although he was an infielder, Chae was switched to catcher when he first joined the club. But catcher wasn’t right for him as he didn’t get to play in a single game for the first two years. At the time, Chae had a three-digit number on his jersey: three-digit numbers are only given to training players.

“At the time, my dream was to play in a Twins’ game wearing a two-digit number jersey,” Chae said.

After completing his mandatory military service, Chae switched positions to be an outfielder and was registered on the Twins’ roster. In his rookie season, Chae competed in 62 games with a .277 batting average and one home run.

Although he managed to find his spot on the Twins roster in his first season, he wasn’t an exception when it came to the sophomore jinx - Chae’s second season with the Twins was his worst, finishing with a .249 batting average with four home runs and 70 RBIs in 90 games. Chae blames that difficult year on rushing to see better results.

“I was being greedy,” Chae said. “Since I wanted to play better, I was rushing both mentally and technically: this led me to lose the things that I was good at.”

The following season, in 2016, Chae forced himself to solely focus on hitting and staying healthy.

“My first goal was to keep myself at a condition where I could play well in any game,” Chae said. “Since I’m not fast, I’m not a notable player if I can’t hit - so I focused on hitting.”

This season, Chae’s statistics showed significant improvement, but he wasn’t fully satisfied as his club didn’t see much improvement. Chae particularly highlighted the Twins’ struggle against the Doosan Bears. This season, the Twins have lost 15 of their 16 games against the Bears. Their only win was the last game of the season, on Oct. 6.

“To be honest, I don’t feel bad about losing to Doosan,” Chae said. “But losing a game to any team is unacceptable. Winning is the dream of professional players. Rather than 30 home runs, my goal is to help my team play better next year.”