Is Ulsan’s Han the next great Taeguk Warrior?

Is Ulsan’s Han the next great Taeguk Warrior? 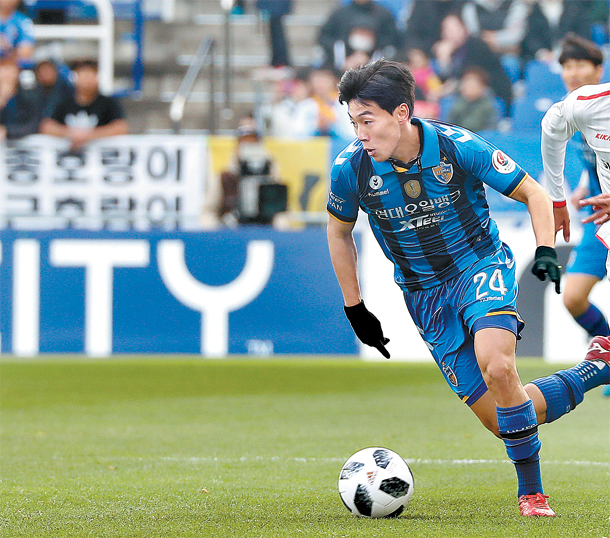 In December 2014, a month before the Asian Football Confederation (AFC) Asian Cup in Australia, Lee was added to the Korean national team’s training roster. Since Lee was an unknown player to Korean football fans, his selection was a big surprise. Despite low expectations, Lee earned his spot in the team’s final entry and at the Asian Cup he scored two goals to help Korea to a runner-up finish.

This year, Han hopes to be the next unknown star to take the Korean national football by surprise at January’s Asian Cup in the United Arab Emirates (UAE).

Having won the K League’s Young Player Award this season, Han also earned a spot on the national football team for the first time in his career. Although he is currently training in Ulsan, it is not yet guaranteed whether Han will compete at the Asian Cup. Head coach Paulo Bento will finalize his roster on Dec. 20.

Bento’s current 23-man training roster includes players from the Korean, Japanese and Chinese leagues. In his Dec. 20 roster, the final 23-man team will include players in the European and Middle Eastern leagues.

Among Ulsan Hyundai players, Han is known as “Mali,” a Croatian nickname meaning small. The moniker was given to him by former Ulsan striker Ivan Kovacec of Croatia. Just like his nickname, Han is a small attacking midfielder, standing at 1.71 meters (5 feet 7 inches), and weighing 65 kilograms (143 pounds).

Despite his small stature, Han is fearless on the ground. As Ulsan’s attacking midfielder, he led the team’s offense with five goals and seven assists. With Han’s help, Ulsan finished third in the K League 1 this season with 17 wins, 12 draws and nine losses, totaling 63 points. The club also finished as runner-up in the Korean FA Cup.

“In football, you don’t always play well by being tall,” Han said. “Players like Andres Iniesta of Spain and Paulo Dybala of Argentina are dominant on the field with their aggressive touch, passes and shots. To survive, I watch these players’ clips and study their playing styles.”

During Ulsan’s match against Suwon Samsung Bluewing on Sept. 29, Han scored a mid-range wonder-goal to help his team to a 2-2 draw. Just like Son Heung-min of Tottenham Hotspur, Han also has small feet. However, he never considered it a disadvantage: it just meant more practice for Han.

“I have small feet but I try to make a strong impact and take confident shots,” Han said.

Along with national team regulars Kim Min-jae of Jeonbuk Hyundai Motors, Hwang In-beom of Daejeon Citizen FC and Hwang Hee-chan of Hamburger SV, Han was born in 1996. Although all four players are the same age, Han is off to a slower start as the other three players earned their fame by competing at the Asian Games in August.

As Han failed to make it onto the final U-23 national team, he had to watch his friends win gold medals at home through a television. The U-23 national team’s success strongly motivated Han and he went on to win the K League’s Young Player Award, which is only awarded to players in their first three seasons as pros.

Following a successful season in the K League 1, Han was reported to have caught the attention of scouts at Japanese and Spanish clubs. Han, however, is solely focused on the Asian Cup.

“Foreign clubs did show interest in him, but for now he is focused on getting onto the final roster for the Asian Cup,” said Han’s management.

Since Han first started playing football, his family hasn’t been financially stable. Due to this, Han gave all his money to his parents when he signed a contract with Ulsan to help pay off their debts.

To do so, Han’s primary goal is to earn his spot on the national team.

Since Bento was first appointed as head coach in August, he has been assigning smaller players in midfield. Rather than a strong midfielder, Bento seems to favor a midfielder who makes good passes, like Hwang In-beom. Nam Tae-hee of Al-Duhail SC was regularly assigned as attacking midfielder in Bento’s lineup. Nam, too, only stands at 1.75 meters. However, since Nam won’t be able to compete at the Asian Games due to an injury, this might make space for Han. He’ll need to prove to Bento that he has what it takes at the national team’s training session.

“Even if I don’t make it to the Asian Cup, that doesn’t mean that my football career is over,” Han said. “My teammate Joo-ho, who also made it to the national team, encouraged me by telling me to keep my head up all the time.”