‘Dear My Room’ builds a new style of drama: The end of each episode of the Olive series offers tips about interior design

‘Dear My Room’ builds a new style of drama: The end of each episode of the Olive series offers tips about interior design 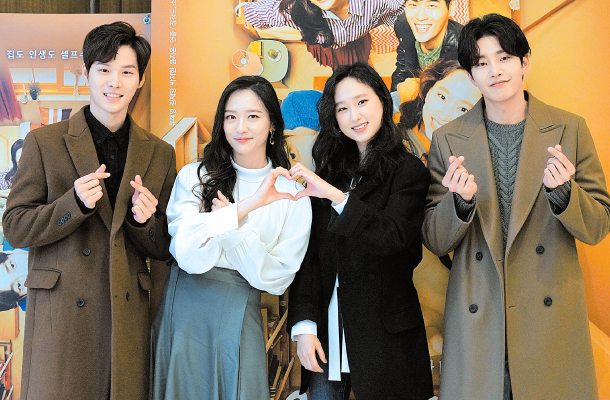 The arrangement of furniture and the colors of one’s home say a lot about the characteristics of who lives there. The same applies the other way around - a person’s home also shapes how they see the world. A messy room could mean that someone is facing a complex situation, but that messiness may also contribute to that person’s tangled emotions.

This is exactly how 29-year-old Shim Eun-joo - the main character of cable channel Olive’s series “Dear My Room,” played by actor Ryu Hye-yeong - feels after she quits her job. Her hectic work life allowed her to spend only 18 hours a week at home. After she resigns from her job, she spends most of her days at home, which only gets messier by the day, reflecting her confusion and fears about her own future.

“I was able to relate well to the character,” said Ryu during an interview on Tuesday. “Before I started playing Eun-joo, I was a jobseeker just like her. I felt a little anxious while I was resting. I thought, ‘Eun-joo is no different than me’ - she thinks the way I used to think.”

Shim’s lifestyle, however, changes when her close friend, an interior designer named Seo Min-seok (played by actor Kim Jae-young), fixes the lights at her house and helps her paint the walls of her room to cover the wine stains on them. Seo has been Shim’s friend for 19 years, and only two things interest him in life: interior design and Shim. He has always been there for Shim as a friend and slowly starts developing feelings for her when he helps her design her home.

“Dear My Room” is Kim’s first lead role of his career. Previously, he appeared in minor roles in dramas and films.

“I did feel pressure,” he said. “But I leaned on other actors and learned a lot in the process. It was hard in the beginning, but [everybody] treated me nicely.”

Regarding his role, Kim said, “Min-seok is the starting point of Eun-joo’s change. It’s a character that brightens her up and also feels thankful in return.”

Thanks to Seo’s help, Shim becomes interested in redesigning her small home - she starts fixing up and decorating parts of her room, while sharing the process on her Instagram. She gradually develops into a professional interior designer.

One of the reasons why Ryu decided to star in the series is because she is also interested in the world of interior design.

“Eun-joo becomes an interior designer in the series, and I myself am actually interested in the field. I often watch foreign TV channels related to interior design. I also dream about how my future home will look.”

She added, “[If I were to redesign my home,] I would start by throwing away [unnecessary things]. I am good at throwing things away, although I’m also good at buying things.”

The chemistry between Shim and Seo, however, comes into conflict as Yang Jae-hyeon, played by rookie actor Yun Ji-on, starts to show interest towards Shim. Yang is a cute, energetic 24-year-old friend of Shim’s younger brother who starts to like Shim after he follows her in Instagram. Although he is studying sculptures, he has a greater interest in interior design and even wins an interior design contest after gaining some ideas from Shim’s posts.

“I read an interview with Kim where he says that he became jealous of me in real life [in order to play an envious friend in the series],” Yun said. “It was the same for me as well. I felt uncomfortable in the beginning. But now we get along well.”

“Jae-hyeon is a freewheeling character. I want to show his trouble-free side through my acting,” said Yun.

One troublesome character that continuously gets in Shim’s way is Ryu Hye-jin, played by actor Park Ji-hyun. Considered the antagonist of the series, Ryu is from a rich family and was once the pretty and popular girl in high school. But in reality, she is a lonely girl who seeks attention and love from others. Although she pretends to be nice to her high school friend Shim, Ryu envies her.

But according to Park, Ryu is actually a very common and relatable character.

“After finishing the series, I understood the character very well,” Park said. “I know that we have all once envied or hated someone. I just want to say that Ryu is not a bad character. I hope that viewers support her more.”

Although the series appears to be a romance story, its focus lies more on Shim’s personal development.

“The series does not really feature a big, surprising event,” said director Jang Jeong-do. “Rather, it focuses on Shim’s personal growth. Romance is just a necessary part [to satisfy the audience].”

The show, based on the web comic series by the same name, premiered on Nov. 6 and has aired six episodes so far. Since then, it has gained popularity especially among those in their 20s and 30s who, just like Shim, are trapped in their hectic work life and often concerned about their future, dreams, jobs and friends.

According to co-director So Jae-hyeon, the series intends to “heal” viewers struggling in their hectic life.

“The series communicates with the young generation, [thanks to its relatable themes.] We have worked hard in the quality of the series, and we are very satisfied with how it turned out.”

Meanwhile, actor Ryu wants people to learn a lot of information about doing their own interior design through the series. Each episode contains an epilogue where the actors team up with different YouTubers who make videos about interior design. Together, they teach viewers how to repair or design furniture or home appliances.

“I wanted to include a lot of tips in the epilogue, so that [those who wish to gain information on self-interior design] can come back to watch the epilogues at least,” said Ryu.

According to director Jang, he is already looking forward to a second season.

“I don’t know how viewers will take it, but we are definitely looking forward to it. We started filming the first season with the intent that there will be a season two.”

“I think that the props team and the arts team were the most important members of the crew,” said actor Ryu.

“I gained confidence through watching them work whenever I felt tired. [My participation in the next season depends on] whether they will be working on the show again.”

The series airs every Tuesday at 11 p.m. on cable channel Olive.