What Ri must learn from Hanoi

What Ri must learn from Hanoi

LEE YU-JUNG
The author is an international news reporter of the JoongAng Ilbo. 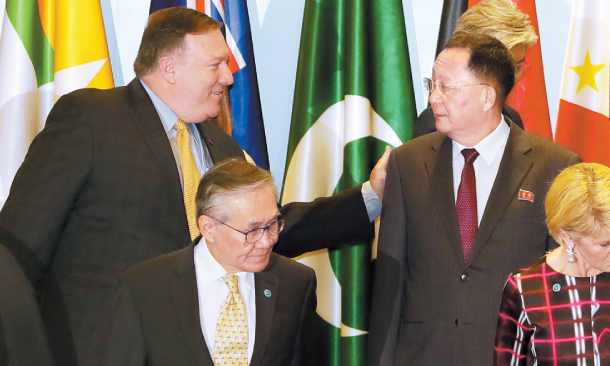 Vietnam is one of the few countries that maintains friendly relations with North Korea. On Nov. 29, North Korean foreign minister Ri Yong-ho visited Vietnam on a four-day trip. Having completed communist unification by fighting against the so-called “imperial America,” Vietnam may be a “role model” for North Korea. On Dec. 6, North Korea’s Rodong Sinmun advocated that self-reliance and self-sufficiency were the consistent strategy of the party and that Vietnam is an unprecedentedly self-reliant country.

However, today’s Vietnam was not created by maintaining hostile relations with the United States, but rather by becoming friends through the Doi Moi reform and opening policy. When U.S. President Barack Obama made an official visit to Vietnam two years ago, a photo of the president eating Vietnamese noodles at a restaurant in Hanoi spread around the world, imprinting the image of Vietnam’s reform and opening.

Vietnam was under strong economic sanctions from the United States for 19 years. When the Vietnam War (1960-75) ended, the United States imposed sanctions by banning trade, financial and weapons transactions because of Vietnam’s human rights oppression. In the 1980s, Vietnam was cornered: it invaded Cambodia, engaged in a war with China and its strong ally, the Soviet Union, deteriorated. The Vietnamese economy struggled because of the sanctions. It resembles North Korea’s isolation in the international stage due to nuclear development.

The Vietnamese communist party adopted Doi Moi at the sixth party convention in 1986, but it did not get much traction at first. As relations with the United States improved, it started to show effects. The United States adhered to the negotiation principle of actions followed by compensation. The anti-Vietnam sentiment in the United States was called Vietnam Syndrome and hawks in Washington fiercely opposed diplomatic ties with Vietnam, a former enemy.

Le Van Bang, the first Vietnamese Ambassador to the United States, visited Korea last month and said that Vietnam built trust by continuously returning the remains of U.S. soldiers starting in the ‘80s. The withdrawal of forces from Cambodia in 1989 also improved their standing with the international community and the United States. In February 1994, the Clinton administration lifted the ban. The following year, relations were normalized between Vietnam and the United States.

In 2017, Vietnam’s per-capita national income hit $2,343, more than twice North Korea’s $1,200. Vietnam, which fought a war against the United States, built trust by first taking action. If North Korea wants the United States to retract its hostile policy, it can learn from Vietnam: Hanoi’s route is the answer to which road to choose.