‘Aquaman’ shows the human side of a hero

‘Aquaman’ shows the human side of a hero 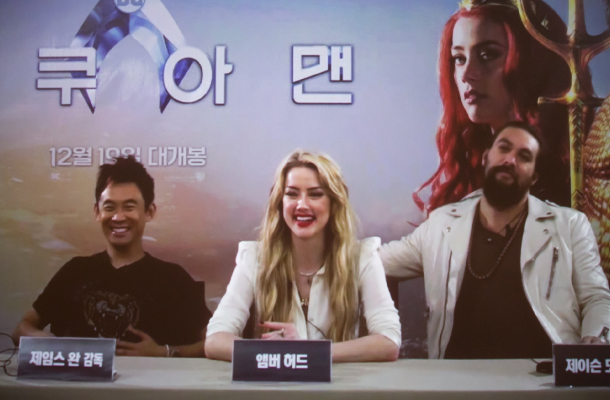 D.C. Comics’ “Aquaman” - which comes from horror director James Wan of the “Saw” series - is a glorious superhero spectacle that highlights the hero’s human side.

Things start to pick up years later when Aquaman decides to confront and fight his half-brother Orm (Patrick Wilson), the current king of the underwater kingdom of Atlantis, who wants to wage a war against the surface world.

“It was an honor for me to be able to take this particular character who was never really done on screen before and present him in a way he was never seen,” said Wan during a video conference with the Korean press on Tuesday.

Wan explained that he tried to create “eye-catching underwater scenes” by creating moments of suspense, shock and horror, which become evident through the inclusion of the monstrous and barbaric creatures of the Trench.

“I wanted imagery in this film that is very striking,” Wan said.

He went on to explain that he aimed to thrill audiences with exciting and highly choreographed action sequences.

Momoa, who was also present at the video conference, said one of the greatest things about his character is his possession of human side.

“To be a hero is to put yourself in front of others and to make yourself selfless,” said Momoa. “[Aquaman would] put his hands in front of a sword to save someone. He [is not perfect, but] tries his best,” he said, adding that a hero is not necessarily always a strong guy with big muscles.

This was also what Wan paid attention to the most.

“I wanted human elements [in this movie] to really resonate with audiences,” Wan added.

“They have to be able to relate to this character, and the only way [to do that] is to bring emotions that all [can] understand and relate to.”