Inspections of guard posts are first in 65 years

Inspections of guard posts are first in 65 years 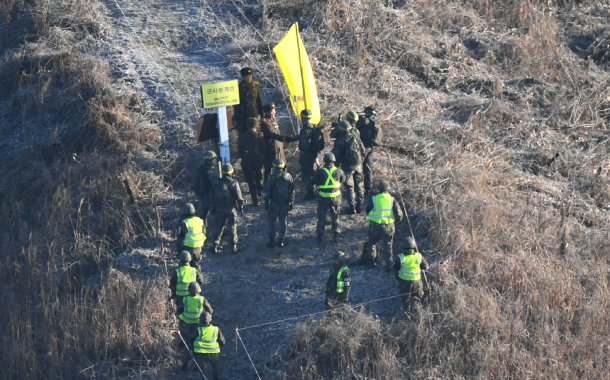 South and North Korea on Wednesday began joint inspections of guard posts dismantled last month as part of an inter-Korean military agreement - the first time troops from the two technically warring countries visited each other’s military installations in the demilitarized zone (DMZ) since the end of the 1950-3 Korean War.

According to the South’s Ministry of National Defense, military inspectors from the South looked over the North’s demolished guard posts Wednesday morning, and then the North’s inspectors came into the South in the afternoon to conduct their own inspections.

A total of 154 military inspectors from both sides were organized into five squads for the review, a Defense Ministry spokesman said. Each squad was led by a colonel-rank official and took with them filming equipment to record the demolitions.

“Our military used 11 temporary paths laid over the last ten days to reach the military demarcation line this morning,” the spokesman said. “Our inspection teams then met up with the North’s officials at a special meeting zone marked with a yellow flag, who guided them to their dismantled guard posts.”

The inspectors examined how thoroughly the guard posts have been demolished and whether they can still serve a military purpose. Any underground installations in the vicinity of the guard posts were also subject to inspection.

On Oct. 26, the two sides agreed to withdraw troops and weapons from 22 guard posts in the DMZ and dismantle 10 each by Nov. 30.

One guard post was left intact but empty on each side as symbolic reminders of the tense history between the two Koreas.

Teams led by generals agreed during the October meeting to conduct joint guard post inspections this month as a final step in their agreement, which itself was a follow-up to the summits this year between South Korean President Moon Jae-in and North Korean leader Kim Jong-un.

One of the primary goals of the Panmunjom Declaration, signed by Moon and Kim at their first summit in April, was to turn the 240-kilometer (149-mile) DMZ between the two countries into a peace zone.

When the two leaders met for a third time in Pyongyang in September, they signed a military accord to “expand the cessation of military hostilities in regions of confrontation such as the DMZ” for a “fundamental resolution to hostile relations.”

The approximately 220 guard posts - around 60 belonging to the South and 160 to the North - in the vast woodlands of the DMZ are, in effect, mini-fortresses equipped with heavy weaponry that has increased over the decades.

The only reason anyone enters the landmine-ridden DMZ in the first place - which in itself is a difficult task since the South’s side is technically under the jurisdiction of the United Nations Command - is to maintain these installations, which many analysts see as power kegs that hinder peaceful cross-border exchanges between the two Koreas.