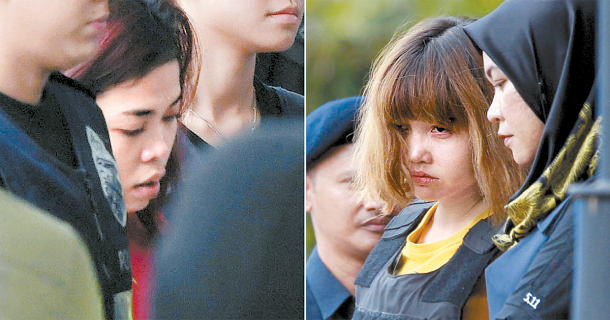 Siti Aisyah of Indonesia, left, and Doan Thi Huong of Vietnam, right. The two women were charged with the assassination of Kim Jong-nam, the estranged half brother of North Korean leader Kim Jong-un in Malaysia last year.[JOONGANG PHOTO]

Kim Jong-nam was killed by the deadly nerve agent VX at Kuala Lumpur International Airport in Malaysia on Feb. 13, 2017. Two women in their 20s - Siti Aisyah of Indonesia and Doan Thi Huong of Vietnam - smeared Kim’s face with VX, an illegal chemical weapon. Malaysian authorities arrested them and later charged them with Kim’s murder.

Pyongyang has officially denied any involvement in the assassination, but the four North Koreans thought to have directed the women escaped immediately, according to Malaysian police.

“Vietnam requested an official apology from North Korea for involving its citizen in the assassination of Kim Jong-nam, and their bilateral relations sharply worsened,” the diplomatic source in Vietnam told reporters. “While it is not an official apology, North Korea conveyed its apology in an unofficial manner to Vietnam.

The four North Korean men involved in the case escaped from Malaysia the same day. One of these suspects, Ri Ji-hyon, 34, is the son of Ri Hong, a former North Korean ambassador to Vietnam. Ri, familiar with Vietnam, was said to have lured Doan Thi Huong, who was hoping to break into the entertainment industry, into the assassination. The women testified that they thought they were participating in a prank. Bilateral ties between North Korea and Vietnam rapidly soured after Kim’s assassination.

The Vietnamese government, outraged by the involvement of its citizen, considered cutting diplomatic ties with North Korea. It rejected North Koreans’ requests for Vietnamese visa extensions, with the exception of diplomats, and declined to extend lease extensions for North Korean restaurants. North Korea was said to have extended an apology to Vietnam due to its diplomatic pressure.

The North Korean top envoy’s visit to Vietnam is believed to have been possible because of this belated unofficial apology. It can be considered a move to normalize bilateral relations between the countries again.

“If North Korea makes an official apology, it will be admitting to assassinating Kim Jong-nam, which is why it was through an unofficial manner,” the source said. Despite the unofficial nature of the apology, it is the first time that North Korea has acknowledged its responsibility for the assassination of Kim, which drew intense criticism from the international community.

Ri Su-yong, a vice chairman of the Central Committee of the North’s Workers’ Party, held talks on Tuesday with Le Ba Binh, the new Vietnamese ambassador to North Korea, according to the North’s official Korean Central News Agency.