At the tender age of 17, Cha Jun-hwan is going where no male Korean figure skater has gone before. 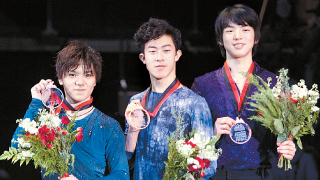 From left: Japan’s Shoma Uno, the United States’ Nathan Chen and Cha Jun-hwan pose for a photo at the Grand Prix of Figure Skating 2018-19 in Vancouver on Dec. 7. [AP/YONHAP]

Once a cherubic child actor who melted many a heart in television commercials, Cha is now the nation’s sweetheart on ice. But he isn’t just a pretty face in shiny costume. In just his second senior season, Cha has developed into one of the world’s best, with plenty of room to grow.

In five competitions so far in the 2018-2019 International Skating Union (ISU) season, Cha has yet to miss the podium. The impressive run culminated with a third-place finish at the ISU Grand Prix of Figure Skating Final in Vancouver last weekend.

“I was nervous before the Grand Prix Final, but I was able to stay composed during the competition and execute everything I’d practiced,” Cha said after returning home from Vancouver on Tuesday. “My goal for the rest of this season is to stay healthy and skate with confidence. I won’t ask myself any more than that.”

Indeed, Cha wasn’t just happy to be there: he scored 89.07 points in the short program, his second-highest score of the season, to place fourth. He then rallied with a personal-best 174.42 points in free skate to rank third overall. His combined score of 263.49 points was also his new career high.

Though Cha was closer to fourth place than second place, this result was still quite exciting in its implications: Cha, the youngest skater in the men’s singles at the Grand Prix Final, hasn’t even reached his prime.

Cha posted consecutive second-place finishes in lower-tier ISU Challenger Series events, first at the Autumn Classic International in Canada in September, and then at the Finlandia Trophy in Finland.

At the Autumn Classic International, Cha established a new personal best in the short program with 90.56 points. And with 259.78 total points, Cha finished 3.87 points back of Yuzuru Hanyu, the two-time reigning Olympic champion. But Cha outscored the Hanyu in free skate by 3.31 points.

Cha made history during the Grand Prix season. By finishing third at the Skate Canada International in October, the teenager became the first Korean - male or female - to reach a Grand Prix podium since - who else - Kim Yuna.

Hanyu was the top qualifier after winning both of his Grand Prix events, but he withdrew from the Grand Prix Final because of an ankle injury. That left Hanyu’s rivals Chen and Uno as the front-runners, with Cha also regarded as a medal contender.

Armed with more demanding programs, Chen and Uno finished comfortably ahead of Cha and the rest of the pack. Chen, a technical whiz who landed a record eight quadruple jumps en route to winning the 2018 world title, attempted two quads in the short program and four more in free skate. Uno, who’s no slouch himself when it comes to quadruple jumps, also built his programs on six quadruple jumps in total.

Cha, in contrast, had one quad in the short program and two in free skate.

Men’s figure skating has primarily become about power and athleticism, with artistry and choreography taking to the backseat. Today, it’s mathematically impossible to win a significant international event that way because a few months after Vancouver 2010 the ISU raised the base scores for quadruple jumps to reward skaters for difficult elements.

The ISU lowered those base values for the quads before the 2018-2019 season, but they remain well ahead of base scores for triple jumps.

Skaters earn extra points in grade of execution (GOE) based on their form and landing. Chen scored 4.40 GOE points for his quad flip, giving himself 15.40 points right out of the gate. Later on, Chen did a quad toe loop and triple toe loop in combination. All jumps performed in the second half of the program are awarded bonus points for “highlight distribution,” whereby the base value is multiplied by 1.1. For that quad-triple combo, Chen had a base score of 15.07, and he scored an additional 3.26 in GOE.

Cha, on the other hand, fell on his opening quad toe loop, and got docked 3.57 points in GOE. He had a clean quad salchow for his next jump, earning 12.75 points combined from the base value and GOE.

Given Cha’s age and tantalizing talent, it’s hard not to get excited about his prospects at the next Winter Olympics in Beijing in 2022. He’ll only be 20 then.

But Cha stressed he doesn’t want to get carried away by hype.

“I think it’s more important to focus on the present than to start thinking about Beijing,” he said. “I’d like to become an athlete who gets better every year.”