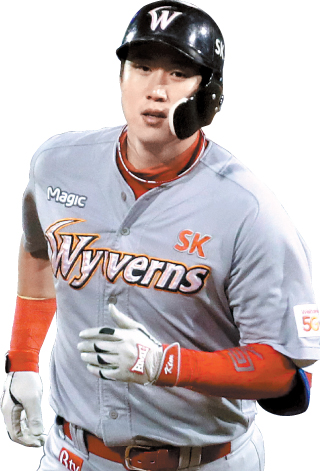 Outfielder Kim Dong-yub may not have chosen to be transferred to the Samsung Lions when he was just finding his feet in the KBO, but he’s determined to continue knocking balls out the park at his new home in Daegu.

Although Kim turned pro immediately after graduating high school, it was years before he made his debut in the KBO. After graduating from Bugil High School in Cheonan, South Chungcheong, in 2008, Kim headed straight to the United States and signed with the Chicago Cubs.

Kim left with high hopes of becoming one of the few Korean baseball players to see success in the big leagues, but his career didn’t last long. After suffering from injuries, Kim gave up on his dream of playing in the MLB and returned to Korea in June 2013. After completing his military service, Kim was selected by the Wyverns in the ninth round during the second 2016 KBO rookie draft in August 2015.

Despite his major league pedigree, Kim wasn’t even considered a KBO rookie to watch out for when he made his debut.

Despite the low expectations, Kim finished that rookie season with a .336 batting average with six home runs and 23 RBIs in 57 games. In 2017, his second season, Kim once again showed improvement, hitting 22 home runs: this was good enough for manager Trey Hillman to name Kim as the club’s cleanup hitter.

In the 2018 season, Kim had a disappointing .252 batting average, but still made improvement in his home runs, at 27. Even at Jamsil Baseball Stadium, the biggest in the KBO, Kim’s home runs proved enough to make it into the parking lot.

Kim may have hoped to continue his development with the Wyverns, but that wasn’t to be: on Dec. 7, the Wyverns made a three-on-three trade and Kim was off to the Lions. As the Lions finished ninth in home runs in 2018, they were in real need of a slugger. Although it is a disappointment for Kim to be leaving the Wyverns, he is more determined than ever to prove himself with the Lions.

Q. How do you feel about moving to a new team?

A. I felt puzzled and couldn’t say a word. I was disappointed, but that quickly went away. General manager Son Cha-hoon and manager Yeom Kyung-yup said to me, “it’ll be a new opportunity for you,” so I started to think in a positive way.

Were you expecting the trade?

A day before the trade, the general manager asked me to meet up late at night. Although he didn’t say it, I assumed that he was going to give me a heads up on the trade because I assumed that he wouldn’t be asking me to meet at a cafe so late at night just to talk about my contract. I would have been very surprised if I heard about the trade without knowing anything, but he gave me a slight notice.

Now you have a new start ahead of you. How do you feel?

I feel excited. At first, I was a little depressed about going to a different team, but once I started thinking differently I started looking forward to it. I just want to play well at Samsung. Manager Kim Han-soo called and gave me words of encouragement.

It is very likely that you will be assigned as a designated hitter with Samsung. Are you OK with that?

I have some expectations that my batting average will go up. If they are showing me that trust, I need to respond to it with good results. In many ways I think everything will be set up in my favor.

During your three seasons in the KBO, you’ve regularly played at Daegu Samsung Lions Park. What do you think about the Lions’ stadium?

It was OK. I could see the ball better so I’m thinking very positively. I can’t wait for next season when I get to wear the Samsung uniform. Even [Samsung catcher] Kang Min-ho called me and congratulated me. It’s more important to play well than to work hard. I really want to play well.

You went to the Wyverns’ end of the year training. What did you work on?

I focused on defense. It was a great training because I gained confidence. Since I heard about the trade after finishing a great end of year training session, I was a bit surprised.

This season, you seemed to have some after-effects from shoulder surgery you had while in the United States. How’s your shoulder now?

I threw a lot at the end of the year training. Since I felt more comfortable mentally, I was throwing better. Even the coaches told me they looked good. So I’m confident. I started to think that I can do it too. There’s a thought in my head that my shoulder can start hurting, but I gained confidence.

What are the improvements you’ve made throughout your time with the Wyverns?

When I first joined the club, there were a lot of good outfielders. To be honest, I was very depressed at the time. But I still managed to make improvements with the Wyverns through the tough competition. Since we had one too many outfielders when the season started, I got to be better by competing against the others. I’m sure it’ll be the same this year.