Blue House petition site still a work in progress: While it makes the public’s voice heard, the forum is often controversial

Blue House petition site still a work in progress: While it makes the public’s voice heard, the forum is often controversial

On Oct. 14, Kim Seong-su, 29, stabbed a 21-year-old employee at an internet cafe to death after a verbal quarrel over up cleaning trash. Police arrived when they were called after their initial fight and left after the situation seemed to have been handled. Kim, who left the PC bang (internet cafe) soon after the police left, came back with a knife 30 minutes later. Kim stabbed Shin dozens of times in his face and neck, and he bled to death in the emergency room. 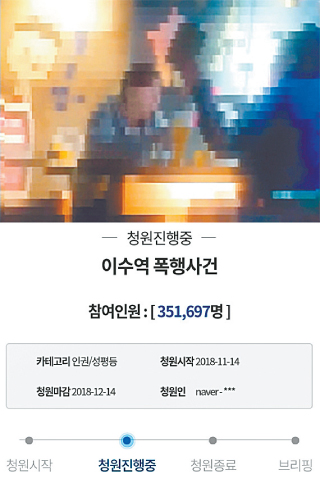 A petition uploaded on Nov. 14 titled “Isu Station Assault” gained 364,696 signatures over the course of a month, and currently is awaiting a response from the Blue House. [SCREEN CAPTURE]

The public became infuriated when Kim reportedly requested that his psychiatric history be considered by the court, which can alter sentencing in Korean law. Many enraged members of the public took to the Blue House website, and an online petition posted on Oct. 17 garnered 1,192,049 signatures over the course of a month. It quickly became the most popular petition since the presidential online petition board’s launch in August 2017.

This has been the first full year of the Moon Jae-in administration, who pledged to listen to the voices of Koreans and focus on communication with them. Among the many policies introduced since Moon’s inauguration, the online petition board is one of the most significant. It has opened up direct communication between the Blue House and the general public.

“The people asks, and the president answers,” said Moon on Aug. 18, the 100th day of his presidency. Through the online petition board, people were given the chance to speak their thoughts directly to the Blue House and the president in the easiest way possible. No complicated files need to be filled out or bureaucratic steps taken; all that is needed is access to the internet.

A new type of public forum

From August 2017 to December this year, over 350,000 petitions in total have been uploaded, including some that have been deleted because they didn’t meet the Blue House’s requirements. Although the submission and signing of a petition is open to anyone with a Facebook, Twitter or Naver account, the Blue House can remove any petitions from the board that include content that is explicit, violent, suggestive or harmful to minors; repeatedly posted by the same user; or are false or defame another person. A petition cannot be deleted or changed by the original petitioner after the initial submission to prevent anyone from changing their objectives after signatures have been collected.

If a petition gathers more than 200,000 signatures within 30 days, the Blue House will post a reply video on its website featuring officials from related government bodies. For instance, a video uploaded on Dec. 11 regarding the Kim Seong-su case and three other petitions related to lenient punishments due to defendants’ mental and physical weakness featured the Blue House’s media secretary Chung Hye-seung and presidential secretary of legal affairs Kim Hyung-yeon.

“The will of the people, which we have seen time and again through the petitions, is clear. We cannot go easy on criminals based on their influence due to alcohol or their mental and physical weakness any more,” said Chung.

Answering the call of the public, the National Assembly passed an amendment on the Criminal Act on Nov. 29, which changed clause 2 of Article 10 from “For the conduct of a person who, because of mental disorder, is deficient in the abilities mentioned in the preceding paragraph, the punishment shall be mitigated,” to “the punishment may be mitigated.” Thanks to the change of a single word, judges no longer have not have to mitigate the sentence, which was mandatory before the amendment, according to Secretary Kim.

Also passed on the same day was the Yoon Chang-ho law, which extended the sentence to murder by drunk driving from more than a year of prison to three years or life in prison. The petition for strengthening the punishment for drunk driving garnered 406,655 signatures from Oct. 2 to Nov. 1, and was answered by the Blue House on Oct. 21.

Both the Kim Seong-su law and Yoon Chang-ho law were backed by the popularity of petitions that appeared on the Blue House website, which serves a means to overcome the limitations of representative democracy, according to Choi Chang-ryul, a politics professor at Yongin University.

“The people’s opinions are inevitably distorted to a certain level within the representative democracy system, because it’s not easy to get their ideas directly through to the government. But with a policy like the Blue House petition board, people can get directly involved and participate in the system.”

Since the petition board has no limitations except for these rules, petitions of all kinds are posted every minute. Up to 1,000 petitions are posted each day according to the Blue House. Out of the 350,000 petitions, however, only 60 petitions have been answered so far and 10 await answers.

Even though many of the petitions touch on hot-button issues, quite often, they address personal issues that are not related to administrative affairs.

“I have no idea what my neighbor is doing,” reads the title of a petition posted on Wednesday. “They’re noisy when I’m reading. They’re noisy when I’m sleeping. I thought they were some internet broadcaster or something, because they’re always on the speakerphone. They speak for multiple minutes, and I’m amazed that they don’t get kicked out by our landlord, who lives just upstairs.” Other titles posted on Wednesday include “You can’t get rid of cheerleaders,” “Please stop everyone from smoking,” “My wife suffers from myelofibrosis” and “Please help us president.”

“This may or may not have been the Blue House’s intention, but the way it’s being used as a daily complaint website is meaningful in itself, too. The myriad of complaints and worries is a barometer of the diverse and difficult lives people are living across different parts of society,” explains Lee Byoung-hoon, a professor of sociology at Chung-Ang University.

“When you have something bad happen to you, it’s obvious that you’d want to talk to people about it,” said Lee. “With the online petition board, people now have the tool to go public with their problems and let the world and the president know their worries. It’s true that people may be misusing the petition board, but we’re on a course of finding order with the phenomena. Right now, all the complaints are directed towards the Blue House and put forward without a clear guideline, which needs to be changed in the coming days.”

A bigger problem with the petitions has not yet been solved, however. Many of the petitions end up dividing the public, and the Blue House board can also fuel public witch hunts.

Examples of this include petition uploaded on Sept. 6 and answered on Oct. 12 in which a female author stated that her husband was wrongly charged with groping due to another woman’s false accusations. Another petition posted on Nov. 14 about the Isu Station assault (a bar fight between two women and four men near Isu Station in southern Seoul), awaits an answer from the Blue House after collecting 364,385 signatures. Both cases are still ongoing, and the Blue House petitions have worked to arouse public controversy about them.

In the case of speedskater Kim Bo-reum, the petition to remove her from the national team gained 614,127 signatures from Feb. 19 to March 21 after she and athlete Park Ji-woo failed to display proper teamwork at the PyeongChang Winter Olympics’ during the women’s team pursuit competition. In March, Park had to be hospitalized due to an anxiety disorder. Frequently, people post petitions that demand death sentences for celebrities, such as singer Suzy and Lee Hong-gi.

“In the same way people use social media, it has the danger of becoming a sphere of conflict,” said Professor Kwak Keum-joo of psychology at Seoul National University. “People in Korea have a tendency to believe that anything different from them is wrong. Because there are no clear guidelines for what can be posted and what not, and also because it’s so easy for people to upload a petition, they just write anything they feel is wrong to them, leading to more conflict and division.”

For the online petition to properly become a legitimate means of communication between the Blue House and the public, change needs to come from both the administrative body and the people, according to experts.

“Mob psychology works on the internet and the Blue House petition board, and people align themselves with popular opinions, like following a fad. To make sure that the petition board stays and does not go away because of all the downsides, individuals must take responsibility and think maturely. People must think before they start a petition, and users must also think about whether a petition is really legitimate before they sign it, rather than just get caught up in the wave,” said Kwak.

Change must also come from the Blue House, according to “Improvement Plan for Blue House’s E-petition System through Examining U.S.’s We The People Cases,” a report by the National Assembly Research Service published on Nov. 16. The report suggests three main ways to improve the petition site: limit petitions from being posted unless they pass certain standards; allow the Blue House to refuse to answer some petitions; and change the anonymous system to make people use their real names.

“It might not be appropriate to require people to come forward with their names, as that would harm the democratic objective of the online petition board,” said Choi of Yongin University. “We must believe in the public’s ability to find the right solutions.”

Lee Yung-hyeock, a professor of police administration at Konkuk University, said that the Blue House must look into the essence of all the petitions to look for a way to improve the site.

“For the Blue House to be truly faithful to the word communication, there needs to be actual outcome. Just listening to what people say and explaining to them why that cannot be done isn’t proper communication - that’s just lip-service. It’s good that they’ve formed a sphere of public opinion. Now it’s time to really look into what the people are asking and take the right measures.

“For example, quite a lot of the petitions are regarding concerns of security, such as Kim Seong-su and Cho Du-sun [the perpetrator in a brutal rape case]. Asking the Blue House to take care of those matters has to do with the lack of trust in existing measures. The Blue House should understand why those petitions have come forward to come up with suitable policies.”