Securities firms have reduced headcount as well. After peaking at 44,055 at the end of 2011, total employment in Korea’s securities industry is now around 36,220.

More troubles are on the horizon.

Since merging with Hyundai Securities in January 2017, KB Securities has closed three branches, in Ulsan and Goyang, Gyeonggi, and sent employees there to neighboring branches.

From Dec. 5, KB Securities began accepting voluntary resignations for the first time since the merger. The company is said to be taking resignations from employees aged 43 and over. It is sending retirees off with severance packages of 27 to 31 months of wages plus another 30 million won ($26,720) each. 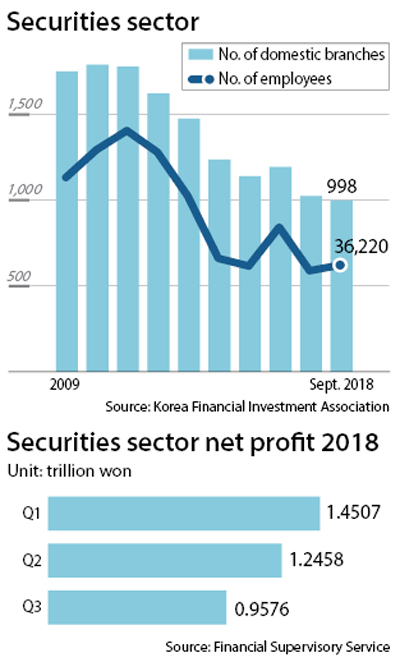 Mirae Asset Daewoo, which formed from a merger in 2016, is reported to be mulling the possibility of cutting 30 percent of its branch offices.

Though the securities firm had promised no “man-made structural changes” after the acquisition, the total number of branch offices has already dropped from 180 to 148 as of September, while the workforce shrunk by around 230 employees since then.

“The number of industry personnel will continue falling as offices merge with one another and companies struggle with employees’ overlapping responsibilities and long commuting hours,” said a manager at a securities firm who requested anonymity.

Industry experts point to two factors that may be behind the rapid downsizing.

One is the poor performance of Korean stocks in general. The U.S.-China trade war and the Samsung BioLogics accounting scandal are believed to have undermined investor sentiment considerably this year.

With brokerage fees accounting for nearly half of profits at securities firms, weak stocks have hurt profits.

The securities sector reported net profit of 957.6 billion won in the third quarter, down 23.1 percent compared to the second quarter, according to the Financial Supervisory Service (FSS).

The drop is more pronounced compared to the first quarter, when net profit totaled 1.45 trillion won.

A bigger concern is the rise of online and mobile stock trading.

Only 14 percent of all stock transactions on the Kospi were initiated using devices at securities firm branches last year, according to Korea Exchange. The rest were made using home and mobile trading systems, which bypass securities firm outlets.

“It’s inevitable to see falling demand for services provided by securities branches given the growth of online transactions,” said Hwang Se-woon, a senior researcher at the Korea Capital Market Institute. “Financial firms need to find new sources of profit by varying their business products to include investment banking, wealth management and corporate finance instead of relying on transaction commissions.”