Auto exports on the rise, but local industry still struggling

Auto exports on the rise, but local industry still struggling 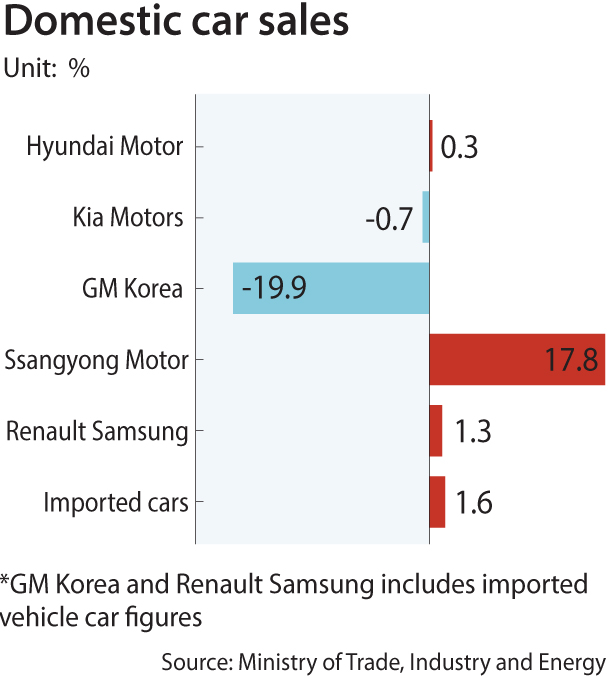 Although exports are on the rise, only Hyundai Motor and Kia Motors actually saw an uptick in sales overseas, while GM Korea, Ssangyong Motor and Renault Samsung all saw sales figures dive, deepening the troubles of the automotive industry.

One distinctive change is the growing popularity of environmentally-friendly vehicles.

According to the Ministry of Trade, Industry and Energy on Thursday, exports rose 1.6 percent to 238,357 units. Kia Motors saw the biggest increase in exports last month, growing 9.6 percent year-on-year to sell 96,000 units. Overseas sales of its SUVs and CUVs, such as the Niro, Soul and Sportage, as well as small vehicles like the K3 contributed to the sharp increase.

Its parent company Hyundai Motor also saw exports grow 5 percent last month thanks to the growing popularity of its SUVs, including the new Santa Fe.

The other three domestic automakers - GM Korea, Ssangyong Motor and Renault Samsung - all saw exports drop. Renault Samsung was hit the hardest, with its sales plummeting by 41.6 percent to 10,194 units. Ssangyong Motor struggled with exports falling 18.5 percent to 2,700 units as it suffered due to strengthened environmental regulations in Europe and economic sanctions against Iran, two of its biggest markets.

GM Korea fell 4.4 percent after it axed the Chevy Cruze, Orlando and Captiva due to declining popularity.

Thanks to the boost in exports, production was up 2.2 percent to 390,573 units. In the first 11 months, 3.67 million units were manufactured at Korean automotive plants. The government expects 4 million vehicles to have rolled off production lines here by the end of the year.

Domestic sales continued to struggle. Overall sales fell 0.7 percent compared to a year ago to 138,612 units. During the same period, sales of imported cars were up 1.6 percent to 24,136 units.

But one of the biggest changes was the surge in sales of environment-friendly cars.