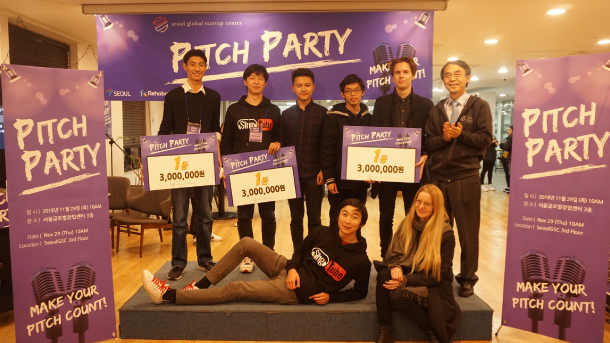 The event was designed to find entrepreneurs with innovative start-up ideas and provide them with opportunities for successful commercialization through intensive support and prizes and to encourage the creation of successful business models.

A total of 104 teams from 36 countries applied for the 2018 Global Startup Competition, which started receiving proposals on Oct. 16. Among them, 34 teams gave the final presentation and surprised the judges with their sparkling ideas.

First place winners were given 3 million won ($2,655) in prize money, those in second place were given 1 million won and third place received 500,000 won.

Erlend Storsul Opdahl of Almond Studio, the first prize winner in the residents category, commended the business ideas and feedback that his company received throughout the event.

“The Pitch Party at SGSC always surprises me with the wide range of businesses and teams coming to share their ideas, ambitions and experiences,” said Opdahl.

“Pitching your ideas in five minutes means you have to address the core ideas of your business, and you can get valuable feedback from eager students, fellow entrepreneurs and seasoned investors.”

Through the event, the Seoul Global Startup Center will assist in the successful creation of new businesses by actively supporting foreigners who are looking to launch their start-up in Korea. Finally, it aims to expand the base of domestic businesses and revitalize the economy by enterprises and investors cooperating with the idea of foreigners residing in Korea.
On the same day, an event dubbed the Resident Expo were also held.

The Seoul Global Startup Center is a business incubation center that helps foreign entrepreneurs in Korea start their businesses in Seoul.
The startup incubator was established in 2016 to address the difficulties faced in the process of starting and operating a business in Korea.

It provides full-fledged support for entrepreneurs and start-ups in the Korean market by providing start-up incubation programs, co-working spaces and various start-up events.