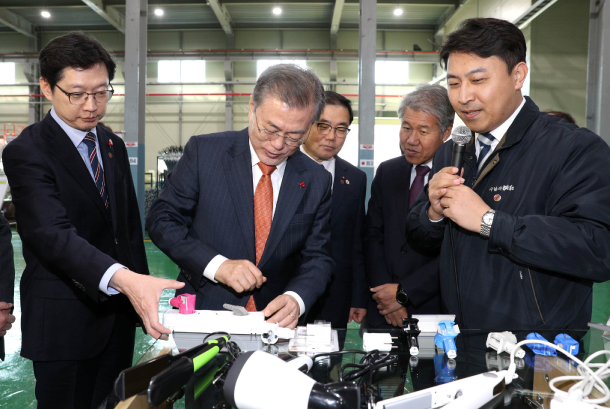 After announcing a policy to create 30,000 smart factories by 2022, President Moon Jae-in, center, visits a company in Changwon, South Gyeongsang, on Thursday. [YONHAP]

Moon’s visit to Changwon was his latest acknowledgement that the struggling economy has pulled down his approval ratings, which now hover around the 40s. Poll results have shown particularly precipitous falls among people in their 20s, the self-employed and in Korea’s conservative stronghold, North and South Gyeongsang.

Moon’s decision to talk about innovative manufacturing with South Gyeongsang entrepreneurs this week was seen by political analysts as an attempt to win back some public support.

On Thursday morning, Moon was briefed about the government’s plan to create 10 so-called smart industrial complexes and 30,000 smart factories by 2022. The Ministry of SMEs and Startups said in a press release that the goal was part of a broader picture to “smartify” Korea’s entire manufacturing industry by applying state-of-the-art information and communication technology on production lines. Authorities hope that automatic control systems will increase productivity and lower defect rates for small and medium-sized companies, ultimately leading to more sales.

By last Friday, Korea had at least 7,666 “smart factories” among small and medium-sized companies that applied such technology, said an official from the Ministry of SMEs and Startups. The government hopes to raise that figure to 7,800 by the end of this year.

Korea doesn’t have any “smart industrial complexes” with smart factories yet, but plans to start a national project by building at least two next year to eventually reach 10 such zones by 2022.

The ministry said in a press release Thursday that it will allocate 300 billion won ($266.6 million) to support companies building smart factories. The Korea Development Bank, Industrial Bank of Korea and the Small & Medium Business Corporation will also invest a net 2 trillion won for purchases of equipment used in smart factories, the ministry added.

After the briefing, Moon had lunch with regional business owners and corporate leaders, after which he visited the office of Samcheon Industrial, a modest company that produces electronic parts for home appliances. Moon toured Samcheon’s smart factory and inquired about youth employment and education.

At his last stop in Changwon, Moon visited the Changdong Art Village, where he met with locals and visited an old bookstore. Blue House vice spokesperson Ko Min-jung said in a statement that Moon purchased two poetry books authored by writers who was born in the region, one of whom wrote a poem protesting Korea’s military dictatorship.

Nuke test may be a 'political decision' away, says top envoy