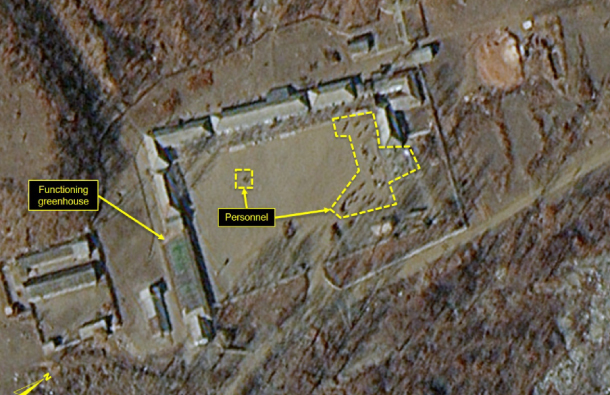 Satellite imagery released by 38 North shows activities of a score of people in North Korea’s Punggye-ri nuclear test site, which the regime said it destroyed last May. [38 NORTH]

North Korea’s Punggye-ri nuclear test site, which the regime said it shut down, still shows signs of activity, according to a report based on new satellite imagery released Wednesday.

The report from 38 North, a Pyongyang analysis website, called for international inspection to confirm the site’s demolishment as a confidence-building measure amid denuclearization negotiations between the United States and North Korea.

It pointed out reclamation activities at the main administrative support area, which was previously demolished. It noted that the two largest buildings at the command center still remain intact according to satellite imagery from late November. The activity at the command center could be a sign that reactivation of the site is possible.

Some two dozen personnel were spotted at the southern support area, according to satellite imagery, “providing additional evidence that the test site has not been fully abandoned,” 38 North added.

On May 24, North Korea demolished its Punggye-ri in North Hamgyong Province, in the presence of reporters from South Korea, China, Russia, the United Kingdom and the United States.

Later that month, 38 North concluded that the last three remaining tunnels, as well as a number of buildings at the site, were destroyed, but questioned whether they could one day be rebuilt. The move was seen as a show of North Korea’s sincerity about denuclearization as it planned the first summit between U.S. President Donald Trump and North Korean leader Kim Jong-un, which later took place on June 12.

Likewise, the report added that the extent of the destruction of those areas beyond tunnel entrances remains unclear, leaving open the chance that they could be reopened or new tunnels could be dug nearby.

In his inter-Korean summit with President Moon Jae-in in September and his meeting with U.S. Secretary of State Mike Pompeo in October, North Korean leader Kim Jong-un agreed to permanently dismantle the Tongchang-ri missile engine test site and Punggye-ri nuclear test site under the observation of outside experts. He also offered to dismantle the nuclear facilities in Yongbyon if the United States “takes corresponding measures.”

The analysis was conducted by Joel Wit - the director of 38 North and a former U.S. State Department official and negotiator with North Korea - and satellite imagery expert Frank Pabian - a former nuclear chief inspector for the United Nations International Atomic Energy Agency (IAEA) for ground inspections in Iraq.

The report noted that a successful inspection of Punggye-ri “would serve to not only build confidence between the United States and North Korea, but also as an initial model for cooperation for future inspections to help verify agreements covering North Korea’s weapons of mass destruction and ballistic missiles.”

The Comprehensive Nuclear-Test-Ban Treaty Organization (CTBTO), International Atomic Energy Agency (IAEA) and representatives from the five permanent members of the UN Security Council - China, France, Russia, the United Kingdom, and the United States - are some of the entities and countries that could conduct the inspections.

The report recommended six tasks for inspectors, including visitation of all key nuclear test areas at Punggye-ri, such as the East Portal, which has been abandoned since the North’s first nuclear test in 2016. This foreign media did not visit this location during the demolition in May.

It further recommended that inspectors be allowed to verify the extent of the tunnels’ collapse, receive tunnel layout maps, be allowed to visit the command center, establish a baseline to measure any future activities and install seismic, infrasound or radiological sensors to help verify that no new tests can take place.

It also recommended that inspectors request that North Korea hand over the diagnostics and instrumentation equipment used at the site to prevent future nuclear testing, which would serve as a symbolic gesture.