Time puts Moon at 5 in Person of the Year list

Time puts Moon at 5 in Person of the Year list 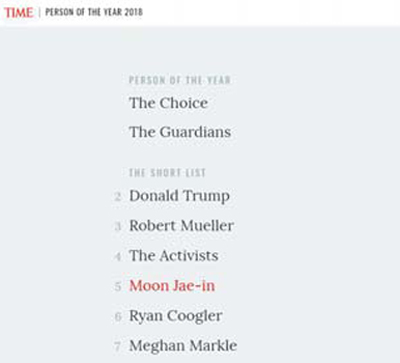 Moon was shortlisted for his efforts to bring peace to the Korean Peninsula and beyond through diplomatic engagements with North Korean leader Kim Jong-un and U.S. President Donald Trump, Time said on Wednesday.

“The South Korean leader took a gamble on diplomacy to avert a global crisis,” read Time’s description of Moon.

He is also praised for brokering the first-ever U.S.-North Korea summit in June between Trump and Kim.

But the article said that actual progress on dismantling the North’s nuclear weapons program has been slow, and that time is running out for Moon to complete his mission under his single, five-year term.

“Still, look at what difference a year can make,” the magazine says.

“In 2017, North Korea launched at least 20 missiles and tested a sixth nuclear bomb. In 2018, test sites were destroyed and symbolic transport links reconnected across the DMZ.”

The DMZ is the demilitarized zone dividing the two Koreas.

“Kim has shaken hands with leaders of South Korea, Singapore, China and the U.S.,” it continues.

“Moon has dragged a rogue nuclear-armed dictator in from the cold. At least as of now, the world is safer for it.”

Time chose the murdered Saudi Arabian journalist, Jamal Khashoggi, and other journalists who sought to report the truth as Person of the Year 2018, dubbing them “The Guardians.”

Trump ranked No. 2, followed by U.S. Special Counsel Robert Mueller, and “The Activists,” the youth movement pushing for gun control in the United States.