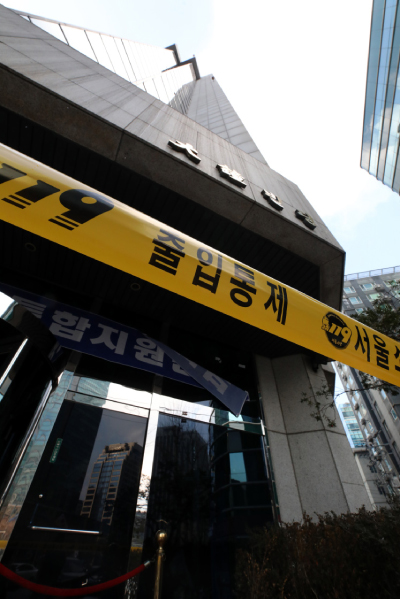 A police tape blocks the entrance to an evacuated office building in Gangnam District, southern Seoul, determined by city officials to be on the brink of imminent collapse on Tuesday. [NEWS1]

Concerns are mounting over the safety of older infrastructure in Seoul after city authorities ordered an evacuation of an office building in Gangnam District, southern Seoul, on Wednesday - the latest in a series of structural failures in the Seoul metropolitan area over the past year.

Construction workers renovating the interior of a dual purpose office and residential building in Samseong-dong found something unsettling while plastering its walls last Saturday. Sections of a pillar on the second floor began to peel off, while the concrete nearby swelled and then cracked, producing a screeching noise.

The issue was immediately reported to the building’s managers, who informed the Gangnam District Office on Tuesday. After bringing in construction experts, district officials discovered that the structure was at risk of imminent collapse and ordered an immediate evacuation of all its occupants by midnight.

Known as the Daejong Building, the 15-story edifice was built in 1991 and was home to around 80 different corporate entities, all of which had to pack up their bags.

But Daejong’s case was only the most recent in a succession of structural mishaps that have terrorized urban residents in and around Seoul - and it was discovered before anyone was hurt.

Last week, an underground pipe delivering heat to residents in Goyang, Gyeonggi, randomly burst, launching a massive eruption of boiling water that killed one man and scalded over a dozen. The 27-year-old pipe had almost no record of maintenance.

Last June, a four-story commercial building in Yongsan District, central Seoul, completely collapsed, injuring one elderly woman. That building was constructed in 1966, and firefighters determined that it had progressively deteriorated throughout the years.

What unites all these incidents is that the structures were old and not rigorously inspected.

According to the Seoul Institute, a think tank for the Seoul Metropolitan Government, approximately 160,000 buildings in the capital were built over 40 years ago, accounting for one-fourth of the 639,412 buildings registered as permanent structures in Seoul. Buildings older than 30 years number 253,705, or 39.7 percent of the total.

The Special Act on the Safety Control of Public Structures mandates that only structures more than 16 stories high or with areas of over 50,000 square meters (538,195 square feet) be subject to regular safety inspections by the Interior Ministry. Smaller buildings - like Daejong, which had only 15 floors - are exempt from central government oversight, though local authorities are required to make inspections.

But those inspections rarely received the level of attention and detail necessary to determine major structural problems. The Daejong building was inspected by the Gangnam District Office in March, but officials merely undertook a quick visual check and determined the building had no apparent problems at the time.

City officials acknowledged there is a serious problem with this form of inspection. “The only reason we found the issue this time was because we looked inside the exterior materials,” a Seoul official said. “We have no choice but to rely on visual checks in most cases, because we can’t rip apart the exterior every time there is an inspection.”

Analysts say the necessity to inspect thousands of old buildings in Seoul is becoming more urgent by the day. “As the housing supply rate rises, redevelopment and reconstruction of older buildings have diminished, leaving many old buildings still in use,” said Shin Sang-yeon, a researcher at the Seoul Institute. “Most private building owners have no idea that their properties should be inspected.”

According to a 2016 report on structure-related safety and disaster management by the Seoul Institute, one out of six buildings in the capital are dilapidated to the extent they have reached the de facto life expectancy for buildings. These buildings serve purposes at the “minimum level required, but can no longer function as normal structures,” the report read.