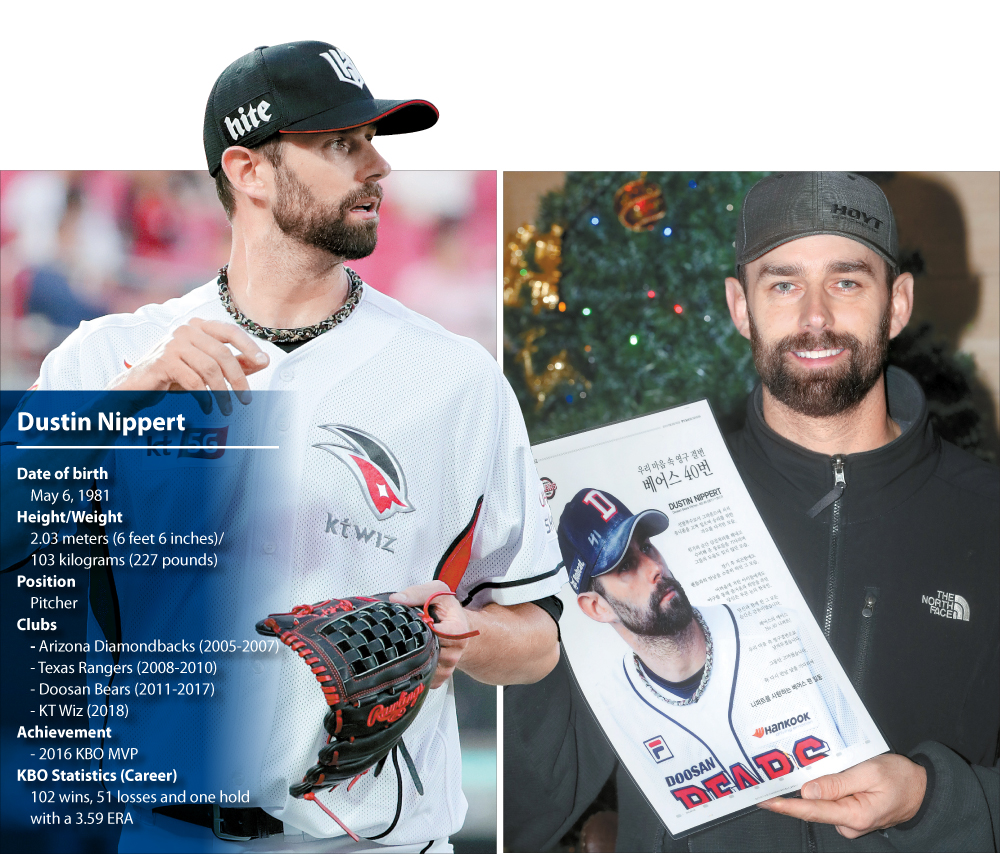 From left: Dustin Nippert reacts during a game against the NC Dinos at Suwon KT Wiz Park in Suwon on June 29. Nippert holds up a full-page ad that Doosan fans published last year, during an interview in Hwaseong, Gyeonggi, Thursday. [ILGAN SPORTS , CHOI JEONG-DONG]

After eight seasons in the KBO, Dustin Nippert is on the hunt for a club that will let him play just one more season in the league.

Nippert, the KBO’s longest-serving and highest-achieving pitcher of all time, is once again a free agent. Since he first joined the KBO in 2011, Nippert has picked up 102 wins and 51 losses with a 3.59 ERA in 214 games. He is the only foreign pitcher in KBO history to pick up 100 career wins.

Despite Nippert’s historic achievement over the last eight years, the offers have dried up this year, and he finds himself without a club willing to sign him up for what he had hoped would be one final year in the KBO.

“I don’t understand,” Nippert said. “At the end of the season, I had a meeting with KT [Wiz] and scouts. They said if I got an MRI and if I was fine, they would sign me back. I got an MRI and it was fine, but they didn’t sign me back. So that was frustrating. I’m getting older. I’ll do any tests that the teams want me to do. I’m not worried about passing a physical or passing an MRI test.”

Before joining the KBO, Nippert started his career in the United States, where he was drafted by the Arizona Diamondbacks in 2002. It wasn’t until Sept. 8, 2005, that Nippert made his major league debut. On March 28, 2008, he was traded to the Texas Rangers. Throughout his career in the majors, Nippert picked up 14 wins and 16 losses with a 5.31 ERA.

Having made his KBO debut with the Doosan Bears in 2011, Nippert made a direct impact on the Seoul-based club by picking up 15 wins and six losses with a 2.55 ERA. With the exception of 2015, Nippert picked up double-digit wins every season, becoming a Doosan Bears legend - at Jamsil, they called him the Jesus of Seoul.

This went a little awry in 2015. Nippert had a rough season and failed to live up to his $1.5 million paycheck, picking up just six wins with five losses.

In 2016, his salary fell to $1.2 million, but Nippert returned full force. Pitching in 167 and two-third innings, the All-Star got 22 wins, more than any other pitcher in the league, and only lost three games. The impressive result saw Nippert win the KBO’s Golden Glove award, and his contract skyrocketed to $2.1 million in 2017.

Injury-plagued and with issues outside the stadium, Nippert struggled to live up to his potential once again, finishing the season with an ERA of 4.06, with 14 wins and eight losses.

Although Nippert managed to start in 29 games throughout the 2018 season, a 4.25 ERA and his age, 37, led him to being without a job when the season ended.

“If my body was hurt a lot last year and missed a lot of playing time, it’ll be time to retire,” Nippert said. “But I missed a couple of starts in the beginning of last year, and I feel like that was my fault because I didn’t get myself ready. I signed with KT late, and I started working out late. But during the season, I think I missed like one start because I was tired. I wasn’t hurt. Physically, I’m fine. All the tests I’ve taken prove that.”

As KBO clubs are only allowed to recruit three foreign players, and only two of those can be pitchers, the clubs are overlooking Nippert in favor of younger, cheaper alternatives. Unlike in Japan, where foreign players with more than eight years playing in the country are counted as domestic players, the KBO makes no concessions based on how long a player has been here.

Nippert may well be out of luck - as of Friday at 6 p.m., every KBO team has filled their foreign pitcher spots except for the Bears. Nippert’s only options to stay in the KBO under the current regulations are to persuade his old team to take him back or hope the league suddenly changes its rules. His best bet may be returning during the season next year if another foreign pitcher is released.

In an exclusive interview, Nippert discusses his achievements in Korea and his possible future here.

Q. Now that the season is over, how are you doing?

A. I’m O.K. Just hoping to play next season. I know right now, there’s not an opportunity in Korea, but I’m looking at other places to play, and hopefully, if a chance opens up in Korea next year during the season, then I can do that. If not, I’m looking to play one more year.

If it’s not the Korean clubs, are you looking at Japan, Taiwan or other countries?

I feel like I’m too old to play in Japan. Right now, it’s either going to be Taiwan or Mexico. I mean I can play in Mexico right now, but I’m waiting here for more options. I feel like Taiwan, it’s closer [so] it’ll be easier for my family. Since we live here, it’ll be easier for my wife and boys to come back and forth. But I don’t know. We’ll see. If I don’t have a job, I’ll just retire. It’s a win-win. I’ll be happy either way. But I want to play.

I feel like my body will tell me when it’s enough. Last year, I felt fine during the season. I know I’m getting older, and that’s maybe why the Korean teams are a little nervous about signing me. But I feel like I have a pretty good track record. One thing that is really frustrating is I pitched better than [other] players, [but] they’re getting contracts and I’m not getting a contract. It’s frustrating, but I can’t control that. So I just got to try to do what I can do.

Once you were released by the Wiz, there were rumors that you might continue your career in the KBO as a coach. Are you interested in coaching?

Maybe later, but not anytime soon. I feel like once my playing days are over, I’m going to need some time to hang out with my family and just get away from baseball. I feel like coaches, their job’s more stressful than the player’s. I feel like I really need to think about that. I wouldn’t say no later, but right now in the near future, I’m not really interested.

During the 2018 season, Eric Hacker returned to the KBO mid-season to play for the Heroes. If you don’t get to sign with a KBO club now, would you be interested in coming back mid-season?

I’m pretty sure Hacker was from Texas. He was able to work out with a college team. But where I’m from in Ohio, there’s not a whole lot. So I want to sign somewhere and play. That way, I can work out everyday and be on a rotation and stuff like that. I feel like if I went home, it’ll be harder for me just to work out by myself and throw and run. I want to be on a team, if I can obviously. If not, I don’t know what I’m going to do, but I would prefer to be on the team in the beginning, like spring training and go.

You’ve had some injuries throughout the year but never really been affected by them - everything always seems to work out. Do you think everything will work out again this time?

I hope so. Even if I don’t play anymore, it’ll be a happy ending for me. I feel like I’ve had a great career, especially the last eight seasons in Korea have been amazing. If I’m done playing, I’ll look back and feel very lucky and very happy about my time here. I won’t have any regrets. So if I play more or if I don’t play more, it’s going to be a happy ending no matter what.

The Doosan Bears fans have shown their affection toward you. Even when the Wiz released you, fans made a petition on the Blue House website asking the Bears to sign you back. What do you think about re-joining Doosan?

I feel like [Josh] Lindblom and [Seth] Frankoff had a pretty amazing year last year. I feel like Doosan should do their best to sign those two players back. I’m not going to say, “Yes, sign me over those two guys.” Those guys had amazing seasons last year with Doosan.

Hopefully Doosan will do right by those two on trying to sign them back and give them every opportunity to come back. But yeah, if they don’t sign them back, why not? I’d be happy to go back.

Why do you think you’re getting so much love from fans?

I don’t know. Probably because I’ve been here for so long. I’ve never really wanted to leave. I had opportunities to leave, but I never have. I’m happy here. This is my home. I’m appreciative that they love me so much and they like me so much, but I don’t feel like I’m more special than the next person sitting beside me. I don’t feel like I’m better than anybody.

Your video for catcher Yang Eui-ji went viral, and your name popped up as one of the top-10 keywords on Naver last week. Just hours later, Yang mentioned you at the Golden Glove awards. Did you see that?

Yes, I saw that. I texted him after he signed his contract. I contacted him and told him congratulations. I feel like when I left Doosan, I didn’t contact the players a whole lot, but I feel like now that it’s feeling like my career’s over, I’m going to try and keep in touch with those guys more. I’m always going to have a home in Korea.

I heard that you’ll be heading back home to the United States. What’s your plan?

But if I’m done playing baseball, we’ll come back for the Lunar New Year and then in America, I have a farm. I have a cattle business. So I’m going to go back there for spring time and start getting that ready. But if I’m playing baseball, that’ll tell me when to go and come.

Did you ever regret your decision to play in Korea?

No, how can I ever regret it? These eight years have been the best eight years of my career. I played for like 16 or 17 years, and my time in Korea has been the most fond memories and my most happy time playing baseball. I have absolutely no regrets in coming to Korea. I’m lucky I got to come here.

In basketball, Ricardo Ratliffe earned his Korean citizenship through special naturalization at the beginning of this year and is now playing for the Korean national team. If you had that option, would you consider naturalization?

I feel like that’ll be something that the Korean government and the KBO would have to figure out. I know in Japan, once you’re there for so many years and play so many seasons, you become a Japanese player. You don’t take up a roster spot for a foreign player. I feel like that’ll be something awesome if the KBO would do that and the government would allow that. I would definitely.

If I can keep playing baseball and keep going [with] my career in the KBO, that’ll be awesome. I think that’ll be amazing. I don’t know if the KBO has even considered that. I just know there’re couple players that have done that in Japan.