Men are all talk, little action about housework

Men are all talk, little action about housework 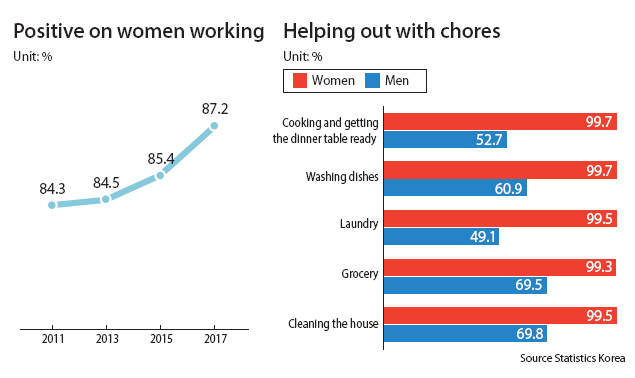 While more people are positive on the idea of women working and husbands and wives sharing household chores, in reality men are less inclined to pick up a vacuum cleaner or wash the dishes.

As of 2017, 44.6 percent of all households, or 5.45 million, are double-income families where the husband and wife both have jobs, according to a study by the Statistics Korea released Friday,

Families where the head of the household is in their 40s are most likely to have two incomes - 52.1 percent of the total. That group was followed by families in the 50 to 63-year range, where 48.7 percent, or 2.24 million, were double income.

Nearly half of all households have two incomes in part because more people are now positive about women being economically active.

Of those participating in a poll, 87.2 percent said they were in favor of women working, up from 84.5 percent from 2013.

The attitudes of husbands have been changing. As of 2016, 46.6 percent approved of wives working, up from 44 percent in 2012. Those opposing fell from 21.6 percent to 19 percent during the same period.

With society becoming more favorable towards gender equality, more people believe that husbands should shoulder more of burden at home. This year, 59.1 percent said that married couples should share household work, up 5.6 percentage points from two years ago. Just 10 years ago, only 32.4 percent said they should share the burden.

The ratio of people who believe wives should take on a greater share of housework has been falling. This year, 38.4 percent said women should be responsible for household duties, a sharp drop from 66.5 percent just 10 years ago.

But the statistics don’t translate so smoothly to actual division of labor.

Only 20.2 percent of men surveyed said they were sharing the chores evenly with their wives, and only 19.5 percent of women said the same.

More than 99 percent of women said they cook, wash dishes, do laundry, shop for groceries and clean.

But that difference sharply increases with marriage. The employment rate for married men was 81.9 percent. In the case of married women, the rate is 53.4 percent, a 28.5 percentage-point gap.

The difference is attributed to women suspending or ending their careers either because of marriage or due to pregnancy or child care.

Of those in their 40s, 46.7 percent said they quit their jobs for these reasons.

But unlike in the past, many taking maternity or paternity leave have been able to come back to work after a break of a year or more.