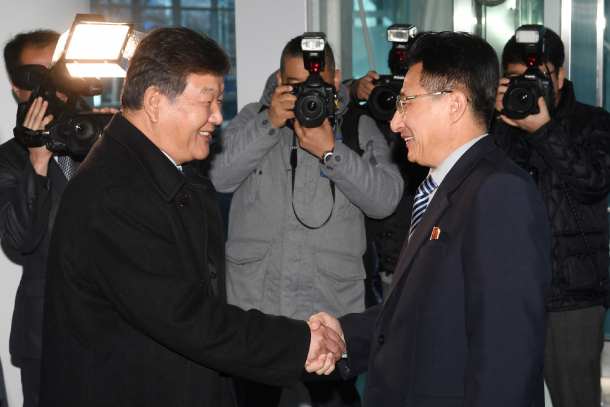 South and North Korea held a second round of sports talks in the North’s border city of Kaesong on Friday and agreed to meet with the International Olympic Committee (IOC) early next year to discuss their joint bid to host the 2032 Summer Olympics.

Greeting each other for the first time since they last met at the Kaesong liaison office over a month ago, South Korean Deputy Sports Minister Roh Tae-kang and North Korean Vice Sports Minister Won Kil-u kicked off their talks by congratulating a combined table tennis mixed doubles team that beat Japan in the semifinals of the International Table Tennis Federation’s Grand Finals on Thursday.

The two sides agreed to meet with representatives of the IOC in Lausanne, Switzerland, on Feb. 15 to discuss cohosting the 2032 Summer Games, and submit a letter of intent to the IOC concerning the joint bid as soon as possible.

Broad agreements were also reached as to which Olympic teams will be fielded jointly for Tokyo. According to a press release by the Unification Ministry, the disciplines in which the Koreas have competed jointly before will be prioritized, as well as those suggested by the Global Association of International Sports Federations, an umbrella organization affiliated with the IOC.

The Koreas also resolved to field combined teams for the 2020 Paralympic Games in Tokyo.

Further details about the joint bid and the combined teams, like a joint training schedule for the participating athletes, are set to be decided in further discussions.

The two Koreas marched under one flag for the 2018 Winter Olympics in PyeongChang, South Korea, in February, which marked the beginning of a thaw in relations on the peninsula.

That event featured a unified team in women’s hockey, which was followed up at the 2018 Asian Games in Indonesia last September, where joint Korean teams competed in basketball, rowing and dragon boat racing - winning gold in the latter.

The success of the joint teams, not to mention its recurring symbolic value, encouraged South Korean President Moon Jae-in and North Korean leader Kim Jong-un to agree to submit a joint bid to host the 2032 Summer Olympics during their September summit in Pyongyang.

Friday’s sports talks were also the third inter-Korean conference to be held at the Kaesong liaison office this week, the first being working-level discussions on forestry cooperation on Wednesday and the second talks on holding a groundbreaking ceremony on the Koreas’ project to connect their railways and roads on Thursday.

In the forestry talks, the two sides agreed to draw up plans to modernize the North’s tree nurseries and combat arboreal disease, based on assessments made by South Korean forestry officials on a recent trip to Pyongyang, according to a Unification Ministry official.