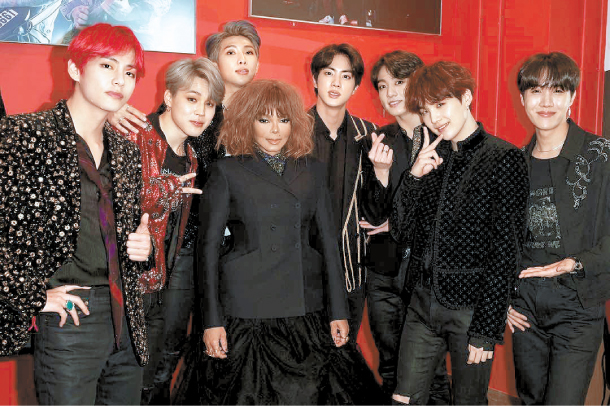 Janet Jackson takes a photograph with the members of BTS after they attend the Mnet Asian Music Awards. [SCREEN CAPTURE]

K-pop boy band BTS has won big at the 2018 Mnet Asian Music Awards (MAMA), picking up two of the top three music awards, which led some of its seven members to burst into tears.

At the end of 2018 MAMA Hong Kong held in AsiaWorld Arena on Friday night, BTS won the Album of the Year with their “Love Yourself: Tear” album released in May, as well as Artist of the Year.

The other top prize, Song of the Year, went to TWICE’s “What is Love?”

Taking the stage to accept Artist of the Year, the final prize awarded at the event, J-Hope, BTS’ main dancer, burst into tears as he gave his award speech.

“I may have cried all the same no matter if we got this award or didn’t get this award,” he said, with his chest heaving. “This year, we have gone through too much hardship and wanted to reward those who have poured so much love into us.”

Member Jin recalled a major crisis the successful boy band had to undergo this year as he continued the award speech.

“This reminds me of a time early this year. We had an enormous emotional burden then and even talked about it among us whether we want to disband or not,” Jin said. “It’s a great relief that we made up our mind [to continue] and came to a great achievement like this,” he said, expressing his thanks to the other members and BTS fans.

Taking the Album of the Year award earlier, team leader RM attributed their success to Bang Si-hyuk, the head of the band’s management agency and producer.

When we were nothing, “producer Bang emotionally and financially supported us, putting trust in us,” RM noted.

“The members only laughed it off after Bang said, ‘I think you are singers worth the top prize and believe you will soon become a top-notch band,” RM reminisced, adding, “We love and respect you.”

These were in addition to four other awards the band took during the 2018 MAMA Fans’ Choice awards in Japan, held Wednesday at Japan’s Saitama Super Arena as part of the three-part 2018 MAMA event, which kicked off in Seoul on Monday.

“Many people say they are energized by our performance. We take our energy from those fans. Going forward, we will come up with better songs and energetic performances,” member Jihyo said.

In the Friday award event, Sunmi, a former member of the disbanded K-pop girl group Wonder Girls, picked up the Best Female Artist award and the same prize for the male artist category went to Roy Kim.

Hosted by CJ ENM, a Korean entertainment giant, MAMA has been held in South Korea and outside of the country since 2009 as a leading annual music awards event in Asia.