DAY6 never stopped rocking, but now it’s cool: They’ve done their own thing for 3 years - these days people are listening

DAY6 never stopped rocking, but now it’s cool: They’ve done their own thing for 3 years - these days people are listening 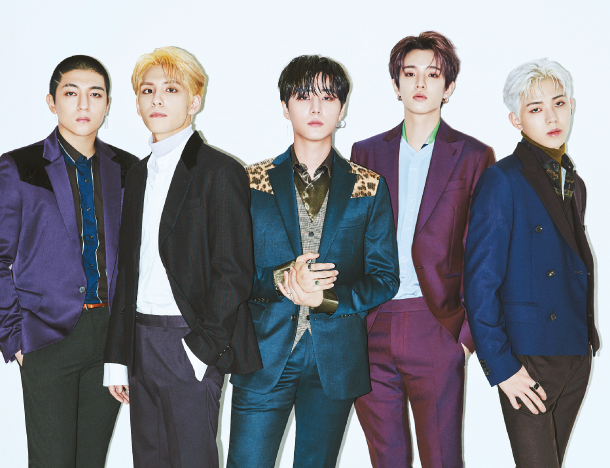 DAY6 sat down for an interview with the Korea JoongAng Daily after releasing “Remember Us: Youth Part 2” on Dec. 10. From left are Sungjin, Wonpil, Young K, Jae and Dowoon. [JYP ENTERTAINMENT]

The path of Korean rock band DAY6 has undoubtedly been a rocky one, but the five-member group has stuck with what they’re good at and hoped that one day their time would come.

Now, three years after their debut, it has. DAY6 has not only amassed a large group of dedicated fans, but their music has reached that all-important milestone where even if you’ve never heard of the band, you probably recognize one or two of their songs. Their latest album, “Remember Us: Youth Part 2,” continued their recent success, topping the iTunes album charts in over a dozen regions, including Hong Kong, Indonesia, Kenya and Peru.

“Remember Us: Youth Part 2,” released on Dec. 10, comes as a sequel to “Shoot Me: Youth Part 1.” The first album, released in the summer, showcased the band’s strong beat and powerful vocals. In “Remember Us,” DAY6 takes people back to the 1980s with their synth pop lead track “Days gone by,” which focuses on the idea of youthful brilliance that’s both beautiful and short, adding an upbeat yet emotional touch to the end of the year.

In a competitive K-pop scene dominated by flashy choreography and addictive hooks, bands often come and go with little fanfare. The few successful names in recent years - FT Island and CNBlue - do make it big, but even they struggle to get many accolades in such a saturated pop-centric market. By staying true to what they’re good at, DAY6 now stands as perhaps the only successful Korean rock band. All the members take part in producing the songs on their albums.

“We were worried, because we didn’t know whether we’d make it or not. But we had pride in our own music. And we just kept at it, hoping that we’d see the light at the end of the road one day - even if we didn’t know when that day would come,” said Sungjin.

The five members of DAY6 - Sungjin, Wonpil, Young K, Jae and Dowoon - sat down for an interview with the Korea JoongAng Daily.

The following are edited excerpts in which the group discussed their new album and how they stuck with their style in a challenging music market.

Q. How did you come up with the songs in “Remember Us: Youth Part 2”?

A. Young K: The “Youth” album projects began earlier in 2018, because we thought that we are currently living our youth. We wanted to communicate the emotions that people feel while during their youth. We also wanted to make an album that we’ll look back on in the future and think, “Wow, this is what we sang when we were younger and what we made.” That was also how we got the idea of synth pop for our lead track, “Days gone by.”

We listened a lot to pop sounds from back in the 1970s and ‘80s during our research for this album. We found that there were a lot of iconic artists back then, so we thought that it would be fun to implement those ideas into our songs.

What message did you want to communicate through the lyrics of “Days gone by”?

Young K: First, we wanted to communicate the bright and upbeat ambience from the 1970s and ‘80s synth pop. That’s the most iconic image of youth, I think. But we don’t always just do fun and happy songs. We try to communicate a certain emotional balance and so there’s a part during “Days gone by” where we use minor chords to illustrate a sense of sadness within the happiness. The overarching message is that we had happy days, we did our best and we loved. The days have gone by, but we’re okay with that.

Did you intend to go retro, since the “Bohemian Rhapsody” movie is so popular?

Sungjin: Definitely not, we finished recording all the songs before the movie’s release. But we are actually happy that [the release of the album] came at a very fortunate timing.

Jae: We have always liked Queen. For instance a song in our second album called “Letting Go” (2016) was actually influenced by Queen. You’d be able to hear it.

You celebrated your third anniversary in September. How did you feel then?

Wonpil: We met up with our fans, and so many people came to the event, which we were so grateful for. Three years is a long time, but still short. Looking back, we did so much during those years. From our debut song “Congratulations” (2015) to this [album], every single thing we’ve done has been precious to us. It brought me to tears, and I’m still very overwhelmed. It was unique for us to debut as a band in the first place, but we’ve been able to make more songs and put on performances. We thank the fans so much for sticking with us.

Do you think you’ve gotten better over the three years?

Dowoon: I’m not sure if I would say that I’ve gotten better, but I do feel more relaxed on stage. For instance, I used to always need a metronome during practice. But one day, I just played making eye contact with Young K, and it felt comfortable. I realized that I wasn’t doing this on my own and that I had the other members to help me.

Did you have any worries about whether you were going to make it, since rock isn’t a popular genre in Korea?

Wonpil: We were anxious. But what we realized is that we don’t have anything to worry about so long as we like the music that we make. In that sense, I still have nothing to worry about. The very fact that we’re still together playing and singing our songs is so precious.

There aren’t any bands out there that are as successful as you are. How does that feel?

Young K: It’s an honor that we get to have an influence on the music market. I think it’s our job to do our best so that other people who want to walk down a path similar to ours would look at us and not give up.