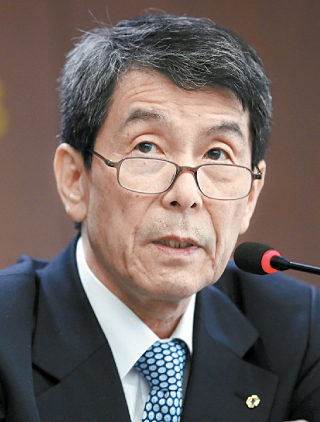 The Korea Development Bank’s (KDB) plans to rescue insolvent companies under its control face growing pressure as the state-owned bank has failed to produce meaningful results even after years spending taxpayer funds.

Stricken company Hyundai Merchant Marine (HMM) is in need of a massive cash injection, apparently due to a miscalculation during due diligence in 2016.

In May 2016, before the KDB took control of HMM, accounting firm Samjong KPMG did due diligence on the company, but failed to properly predict the company’s end-of-year earnings. Samjong expected operating losses to amount to 550.7 billion won ($485.5 million), but the company actually lost 880.0 billion won that year.

According to the results, even in the worst case scenario, HMM would only be 566.0 billion won in debt by 2022. However, after a similar study by accounting company Samil PwC in September, the amount of cash the company will be short by increased to 6.372 trillion won. In just two years, HMM could be in a situation where even 6 trillion won of capital would not stabilize the company.

KDB faces immediate challenges with GM Korea. The state-owned bank in May agreed to provide $750 million in return for GM Korea’s promise to stay in the country for 10 years.

While the bank announced Thursday that it would inject the rest of the money by the end of this month, it is waging a legal battle with the carmaker’s U.S. headquarters over its decision to spin off GM Korea’s R&D unit into a separate company.

Due to worries that manufacturing jobs may suffer if GM focuses solely on R&D, KDB requested the carmaker provide details on its spinoff plan. GM has only recently begun to cooperate, and the relationship between the two continues to be strained. 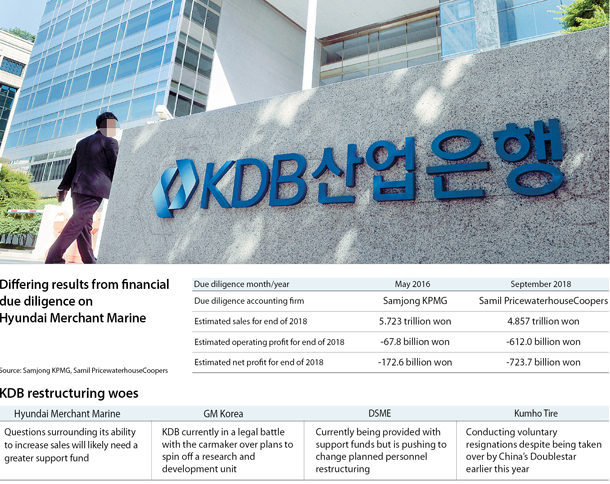 While the KDB has received a breather with Daewoo Shipbuilding and Marine Engineering (DSME), as the company continues to ink orders, the shipbuilder recently announced that it will not go through with its personnel restructuring plan.

Kumho Tire, which KDB sold its shares of to China’s Doublestar in April this year, continues to face difficulty in stabilizing its business operations and is currently taking voluntary resignations.

As companies that are or were under the KDB are struggling to recover, a growing complaint among Korean firms is that the bank’s intervention is just creating more problems for entire industries.

The frustrations are rooted in the fact that it is unfair for companies that are able to stand on their own two feet to be forced to compete with those that are propped up by government funds.

In November last year, a foreign weekly journal that focuses on the oil and gas industry reported that DSME signed a deal on a floating production storage and offloading platform in the Barents Sea off the northern coast of Russia that was worth $100 million less than what was offered by competitors Samsung Heavy Industries and Hyundai Heavy Industries.

Experts are also concerned that KDB is at a point where it can no longer lead industry restructuring as it has done in the past. As private equity funds and other private financial market players are not as developed in Korea, KDB is forced to actively lead restructuring.

The biggest difference with the private financial market is that KDB’s funds are ultimately from the taxpayer. This leads to political decisions potentially weighing in on the industry restructuring process. There is also criticism that whenever there has been a financial audit into companies such as HMM and DSME led by KDB, different political factors in the background played a role in their results.

“KDB is cognizant of public officials, who listen to politicians, who follow labor unions. This has led to accounting firms being swept into public opinion when given work by the KDB,” said an official at an accounting firm.

“This is the reason why there are audits that say that insolvent companies can be revived by a minor injection of taxpayer money,” the official added.

Instead of undergoing harsh restructuring measures by private companies, labor unions tend to view it is as advantageous in terms of job stability to be under the management of a state-owned bank.

Such unions have asked for the KDB to take more responsibility rather than being worried about the company going under.

“Private equity funds push restructuring as a scissor cuts through paper, however KDB cannot conduct such restructuring,” said a KDB official who requested anonymity. “If [KDB] conducts harsh personnel restructuring, there will be immediate opposition from union and political circles.”

Experts say that during a long-term recession, not only cash flow but sales and technology are important, placing more pressure on restructuring led by state-owned banks.

For mass layoffs, instead of the state-owned bank solving the issue by injecting funds, there needs to be policies to create a social safety net.

“[We] have reached a limit in business restructuring led by state-owned banks,” said Koo Jung-han, a senior researcher at the Korea Institute of Finance.

“A policy direction toward planning a fund by both the financial policy institutions and the private sector is needed to raise interest in private investors.”