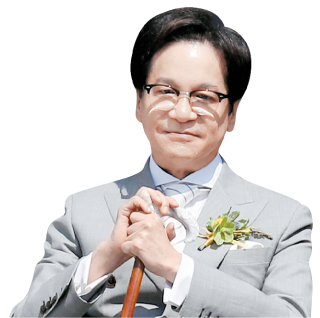 CJ Group is aiming to make a big leap in its global business next year, with Chairman Lee Jay-hyun telling top executives that overseas expansion will decide the conglomerate’s future.

Lee and 50-or-so top executives of CJ affiliates gathered at a meeting in Los Angeles last Thursday to look back at the group’s achievements and devise a global strategy direction for the upcoming year.

Lee embarked on a business trip in late November to visit CJ’s offices in Los Angeles, where most of its U.S. affiliates are based.

The meeting was his last scheduled stop on the trip.

“CJ’s ultimate goal is to be the world’s No. 1 lifestyle and culture company,” said Lee during the meeting. “CJ has infinite opportunities to branch out globally with our diverse portfolio, but our future depends on how much CJ expands overseas.”

“We haven’t had impressive results in the 13 years since 2005 when we first announced our global take-off here in L.A.,” Lee continued. “Though we saw some success in the bio, food and drama industries, there is still a ways to go before we can truly be regarded as a global company.

“In the year 2019 we can no longer step back. We need to pursue innovative policies with a sense of urgency.”

This is the first time in six years that Lee and CJ’s key executives have met outside Korea to hold a global business strategy meeting. The last time they did so was in 2012 in Vietnam and China, where the conglomerate was rapidly expanding business at the time. Last week’s meeting in the United States emphasizes the country’s importance for CJ’s business plan next year.

CJ will launch a two-track global business strategy. While it will try to create an insurmountable gap between itself and domestic competitors in overseas expansion, the company will also focus on strengthening profitability to prepare against stunted growth and economic recession.

CJ has already made considerable inroads in the U.S. food and entertainment industries in 2018. It acquired popular U.S. frozen brands Kahiki Foods and Schwan’s this year, bringing its total number of U.S. production bases up from five to 22. In August, CJ Logistics closed a deal that made it the majority owner of U.S. logistics firm DSC Logistics.

CJ ENM, an affiliate in charge of multiple TV cable channels and entertainment content, announced that it has partnered with Universal Studios and MGM to try its hand in foreign film production last month. In October, it also opened the west coast’s largest e-sports arena with a total 600 seat capacity in Los Angeles.