Around 200 contestants took part at the Macmelie Contest -portmanteau of the Korean word maekju, or beer, and sommelier -on Saturday at a convention center in Gangnam District, southern Seoul. Already having passed an online test to be there among 10,000 people, 27 were ultimately certified as Macmelies. [HOMEPLUS]

Twenty-seven people have been awarded the auspicious title of beer sommelier by discount chain Homeplus.

The discount chain’s first Macmelie Contest - macmelie is a portmanteau of the Korean word maekju, or beer, and sommelier - on Saturday saw 200 contestants gather at a convention center in Gangnam District, southern Seoul, to take a comprehensive test for a chance to become Homeplus-certified beer sommeliers.

A total of 10,000 people had taken an online preliminary test to qualify to attend the Macmelie Contest.

The 27 contestants who passed the test on Saturday with over 70 points out of a 100 were awarded Macmelie ID cards. They were also given the opportunity to be the first to try out Homeplus’ newest beer imports and work together with the company to develop new beer products.

The test included a written paper, worth 60 points, and a more interactive round - inevitably including a beer tasting test - worth 40 points.

Some of the written questions tested contestants’ basic knowledge of beer, for example by asking for the German city that hosts Oktoberfest or the brew’s four core ingredients. 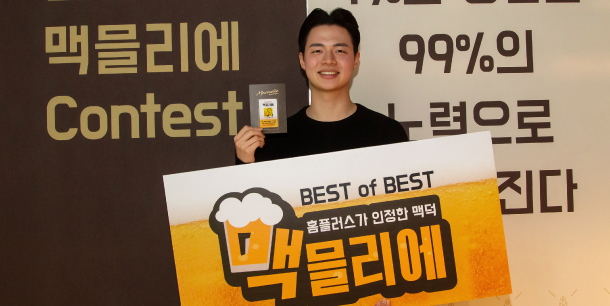 The contestant with the best results was Lee Ik-jin, who scored 84 out of 100 in the test. [HOMEPLUS]

Other questions were more difficult. One asked for the historic period when Duke Wilhelm IV of Bavaria adopted the German Beer Purity Law, while another asked for the number of indents that beer bottle caps have.

The interactive questions were also challenging. Contestants had to guess how many milliliters of beer a cup held and also identify beer types by taste.

Lee Ik-jin scored the highest out of all contestants with 84 points. “I didn’t expect to win first place, but I think my experience drinking a lot of beer in the past helped.”

Homeplus currently offers around 690 types of local and foreign beer. The company says it hopes to enrich Korea’s beer consumption culture through its Macmelie contest.

“We’ve been offering beer from around the world to meet rising demand that we are now even called the beer mecca,” said Kim Min-soo, a brand marketing manager at Homeplus.