[Test drive] Big, beautiful and ready to rule the road

[Test drive] Big, beautiful and ready to rule the road 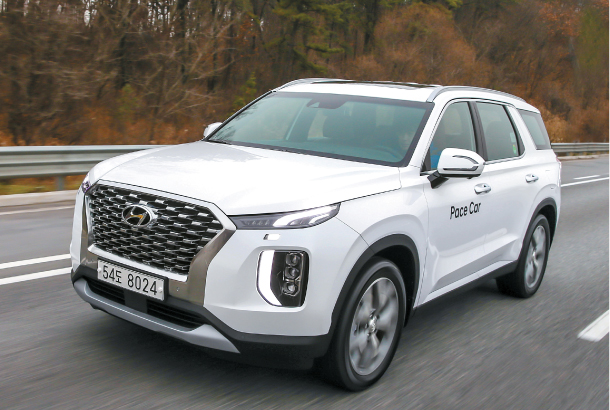 YONGIN, Gyeonggi - The new Hyundai Motor Palisade SUV boasts six USB ports, eight seats, 16 cup holders and a publicity machine that includes everyone from BTS to Beyonce’s stylist. The automaker pulled out all the stops, but as you climb behind the wheel of the huge vehicle, it’s difficult to imagine how it can possibly live up to all that hype.

It turns out it can.

The Palisade proved to be more than capable on a roughly 140-kilometer (87-mile) test drive between Yongin and Yeoju, both in Gyeonggi, last week. The tested car was a seven-seater version of the Palisade, capable of offering up to eight seats, mounted with a 2.2-liter diesel engine. Among the two diesel trims - dubbed exclusive and prestige depending on options - this reporter tried the higher-end prestige trim.

The Palisade is an intimidating site for someone that normally drives a midsize sedan, but the car actually has a surprisingly sleek look that belies its huge size. The huge mesh-type cascading grille does give the car an unmistakably grand presence, but the rest of the vehicle is deceptively understated. Lee Sang-yup, head of Hyundai Design Center, said it is because Hyundai used vertical-centered design for the car’s exterior.

Despite its sharp exterior, the inside of the car is wide and spacious. Lee said the car’s interior has a horizontal focus - the car’s navigation display, console and buttons are aligned in a long, horizontal line.

The drivers’ seat is a comfortable place to be with abundant leg room and plenty of space to move around. The car is large and spacious, but it’s still easy to reach back to the second row to, for example, grab something from there.

The seats in the second row were also comfortable with 1,077 millimeters (42.4 inches) of legroom. The automaker said the large space was possible thanks to its 2,900-millimeter wheelbase, which the company says is the longest among competing cars in the same segment.

The third row, however, is still kind of small for adults to fit in comfortably. This reporter, at about 164 centimeters (5 feet 4 inches) tall, felt uncomfortable sitting in the space, so taller people would really struggle.

One good thing, though, is that the seats in the third row can also be reclined, possibly giving some extra space.

The car’s size might be impressive, but where the Palisade really comes into its own is on the road.

The car felt light, like a compact car. Even going over speed bumps at a reasonably high speed, the car glides smoothly without too much uncomfortable jolting. It also didn’t struggle speeding up on the highway, and the overall noise level inside the car was very low. The car includes active noise control, which reduces engine noise and seems to work well.

Road noise was eventually audible when the car exceeded 140 kilometers per hour, but that shouldn’t be an issue for most people driving at normal highway speeds.

The car was also fitted with useful drive assistant features. Heads-up display was a significant help and far easier to look at than a normal navigation display.

Lane keeping assist, however, got a bit annoying. In a vehicle the size of the Palisade, it is really not hard to veer near the edge of the lane - just a few inches to the right to avoid a truck passing on the left, for example, results in a beeping warning as the car adjusts its own course.

The car also comes with what Hyundai calls multiterrain control. The car has sand, mud and snow modes that help it drive well even in those conditions. This reporter was able to test the sand mode during several minutes of driving on a sandy area by a river in Yeoju, but it was hard to tell if it was easy to drive through the sand because the mode was effective or because the sand was shallow. This feature needs to be tested more in areas with deep mud or snow.

Small additional features added inside the car for family users proved useful. The six USB ports distributed in the three rows inside the car provide lots of options for charging, and changing the layout inside the car is also simple as seats can be folded with the push of a button.

The car, which comes with all these features at less than 50 million won ($44,000), has already proven popular in the Korean market. After preorders began on Nov. 29, orders surpassed 20,000 in just eight operating days, according to Hyundai Motor.