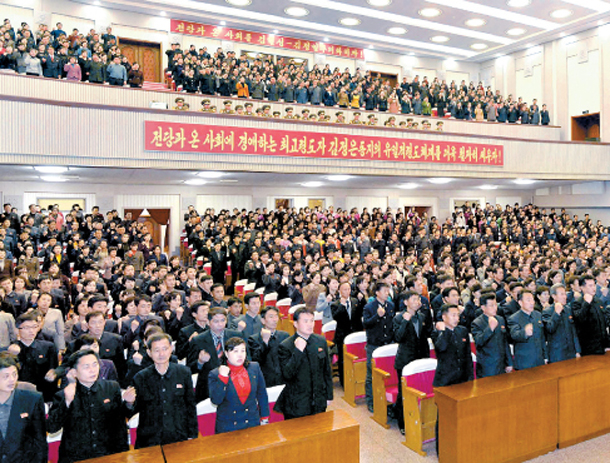 Inter-Korean relations and flashy diplomatic activities have been put on pause as North Korea prepares to commemorate the seventh anniversary of the death of former leader Kim Jong-il today.

Pyongyang has been focused on North-U.S. denuclearization negotiations, improving inter-Korean relations and other diplomatic activities over recent months, a dramatic shift from the end of last year when tensions were high following North Korea’s sixth nuclear test. But Pyongyang is now focused on its domestic activities and commemorating the death of Kim Jong-il on Dec. 17, 2011.

The North’s official Rodong Sinmun extensively covered Kim Jong-il’s death’s anniversary Sunday, with its front page covering international commemorative events and an editorial on Page 6 praising the late leader as an “extraordinary politician” leading his country toward peace and socialism. It even featured a eulogy poem entitled, “Endless yearning, fiery fulfillment” in the late Kim’s memory.

International commemorative events were held over the past month to mark the anniversary of the late Kim Jong-il’s death, including cultural events in Hungary and Libya, lectures and round-table talks in Serbia, Brazil, Venezuela and Ethiopia, and seminars in Romania, Ethiopia and Algeria. State media also referred to coverage in praise of the former North Korean leader in overseas media outlets including in Egypt, Nigeria, Bangladesh and Russia.

Rodong Sinmun noted that the family of Shin Kanemaru, a former deputy prime minister of Japan, and Kiichi Tsunota, representative of the Gunma Prefectural Council for Japan-Korea Friendship and Solidarity, sent floral baskets to the Mansu Hill Grand Monument.

State media outlets focused on highlighting Kim Jong-il’s economic achievements over his military achievements, seen as a move away from the byungjin line policy which pushed for military and nuclear development in parallel with economic development. Since April, Kim Jong-un has especially advocated the economic and scientific development of his country.

On the same day, however, the Rodong Sinmun criticized the South Korean military for “hanging onto a military confrontation that goes against the improvement of inter-Korean relations.” It was especially critical of South Korea’s decision to purchase SM-2 - or Standard Missile-2 surface-to-air missiles (SAMs) - to equip three new destroyers with the Aegis system.

The article noted that when the inside and outside are different - as the two sides straddle dialogue and confrontation, peace and war - “sincere reconciliation and unity cannot be promoted.” It warned the South Korean military not to “misjudge our good will,” adding that “military confrontation could lead to an irreversible collapse.”

This comes as the two Koreas, in keeping with inter-Korean summits this year, have agreed to alleviate border tensions and last week conducted joint inspections of guard posts in the demilitarized zone (DMZ) dismantled last month as part of a bilateral military agreement.

While North Korean leader Kim Jong-un’s visit to Seoul within the year, as agreed on during the Pyongyang inter-Korean summit in September, seems unlikely, a joint groundbreaking ceremony for the cross-border railway project is set for Dec. 26.

The two sides last week agreed that some 100 people from each side will take part in the ceremony, a gateway to the project to modernize the North’s roads and railways and connect them to the South’s. Joint surveys of railways have been taking place since the end of last month.

U.S. President Donald Trump in turn wrote on Twitter Saturday that he is in “no hurry” for the North’s denuclearization, while promising economic prosperity for Kim Jong-un.

“Many people have asked how we are doing in our negotiations with North Korea - I always reply by saying we are in no hurry, there is wonderful potential for great economic success for that country,” Trump wrote in a series of tweets. “Kim Jong Un sees it better than anyone and will fully take advantage of it for his people. We are doing just fine!”

Earlier this month, Trump said that he envisions a second summit with Kim Jong-un in January or February and is reviewing three venues. Since the beginning of the year, Trump has made 92 tweets related to North Korea out of over 3,100 Twitter posts.