A memorial service for the Taean Thermal Power Plant worker who was crushed to death by a conveyor belt last Tuesday was held at Gwanghwamun Square, central Seoul, on Saturday. Participants demanded contract workers be upgraded to the permanent payroll. [NEWS1]

The conveyor belt that took the life of Kim Yong-gyun, a contract worker at the Taean Thermal Power Plant, was confirmed on Sunday to have passed a safety test two months ago. These newly released details shed light on another possible factor in Kim’s death - industrial equipment inspections.

According to the report from the Ministry of Employment and Labor that was delivered to Rep. Lee Yong-deuk of the ruling Democratic Party, the Taean Thermal Power Plant was inspected from Oct. 11 to Nov. 12.

The inspection was supervised by the Korea Safety Technology Association, a private organization. The “CV-09E,” the conveyor belt that crushed Kim to death, was included in the check along with other equipment at the thermal power plant. During the process, visual inspections were undertaken and tests were performed to confirm the equipment was working properly.

For the safety tests, inspectors checked to see if the ramp was in position, if guards were working and if the emergency switch was functioning properly. Other tests were also performed.

Every conveyor belt in the thermal power plant passed the inspection. Regardless, two months later, on Dec. 11, Kim was crushed to death by one. To make matters worse, when the accident occurred, no worker was present to activate the “Pull Cord,” a conveyor safety switch that stops the operation of the machine.

Experts say that daily safety inspections were not conducted in pairs. Only one person was assigned to undertake each check as sub-contractors were entrusted with the responsibility in order to reduce labor costs. 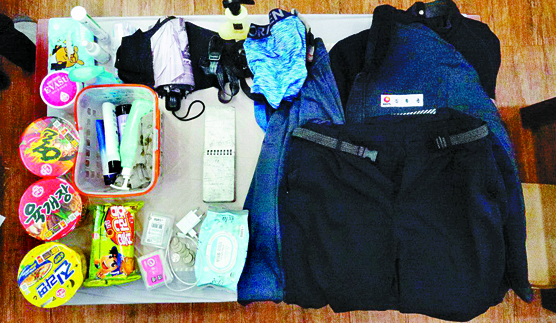 The Korean Public Service and Transport Workers’ Union on Saturday displayed items Kim had with him before his untimely death. [YONHAP]

According to the Korean Public Service and Transport Workers Union, between 2012 and 2016 a total of 346 accidents were reported at Korea’s five major thermal power plants, Of the 346, 337 involved contract workers.

The Labor and Employment Ministry is conducting another inspection that will examine the overall management of the Taean Thermal Power Plant. Supervisors will also be checking to see if the safety inspection two months ago was properly conducted.

“Workers are forced to do dangerous tasks alone, which makes it [almost impossible] to immediately react to threats,” said Rep. Lee Yong-deuk. “A lack of safety education, as well as an insufficient number of safety inspections, is also a problem.”

On Saturday, a second candlelight memorial service for Kim took place at Gwanghwamun Square, central Seoul. A video of Kim’s photos was played during the memorial service. In one of the pictures, he is wearing a suit and smiling before starting his first day of work. At the time, Kim did not know that the first job he had after he was discharged from the military was to be his last job.

Items Kim had on him when he died were displayed. The items included a flashlight he had bought for himself, batteries and instant cup noodles. All of the articles were covered in coal dust.

The cup noodles were to fill his empty stomach as he covered a shift that started at 7 p.m. and ended at 7 a.m.