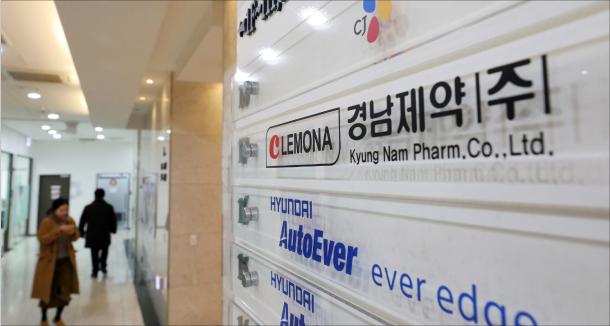 A sign indicating the floor of Kyung Nam Pharm at Dongil Tower in Gangnam District, southern Seoul on Monday. The company awaits the final decision from the Kosdaq market committee on whether it will be delisted from the exchange. The decision will be made by Jan. 8. [NEWS1]

Kyung Nam Pharm’s minority shareholders are staging online protests over the Korea Exchange’s (KRX) decision to delist the company. They complain that Kyung Nam is being treated far worse than other companies also accused of accounting violations.

After being accused of accounting fraud, Kyung Nam Pharm, most famous for its Lemona vitamin C supplements, is in the process of delisting from the country’s secondary Kosdaq exchange after KRX’s announcement Sunday.

The final decision on the company’s delisting will be made by the Kosdaq market committee by Jan. 8.

Kyung Nam’s shares have been suspended since March 2 when it was found that the company violated accounting standards. It was accused of incorrectly reporting sales.

While the company was given six months to improve its management in May, its financial situation has since worsened due to internal conflicts over the control of the company. Kyung Nam has traded on Kosdaq since 2001.

According to the Financial Supervisory Service’s corporate filing system, a total of 5,252 minority shareholders hold 71.9 percent of Kyung Nam’s issued shares as of late September.

Complaints by minority shareholders have been posted on the Blue House’s online petition board, with the shareholders opposing delisting.

“It is unfair to delist Kyung Nam Pharm when it was only fined 40 million won when Samsung BioLogics committed accounting fraud up to 4.5 trillion won and was fined 8 billion won,” read one petition.

Another petition read, “While Samsung BioLogics did not admit to accounting fraud and took legal action, Kyung Nam Pharm has worked to solve the problem by submitting a plan for improvement.”

The KRX explained that the Kyung Nam’s situation differs considerably from that of Samsung BioLogics.

“The difference relates to company sustainability, whether there will be further problems when shares start trading again,” a KRX official said.

“While Samsung BioLogics didn’t have impaired capital, Kyung Nam Pharm went through a management conflict, and both its financial structure and management transparency worsened,” the official added.

A Kosdaq committee will make a final decision on the delisting within 15 business days. The committee may decide to give more time to the company to make improvements.

The MP Group faced a similar situation. While the KRX called for delisting, it was given time to improve.