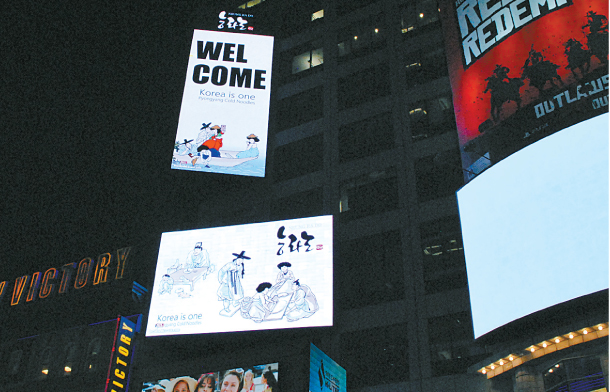 A Korean Pyongyang naengmyeon restaurant is advertising on a billboard in Times Square, New York, where the world’s leading brands, and Korea’s leading names, are also on display. [NEUNGRADO]

Times Square in Manhattan is known for massive neon signs pitching the world’s most powerful brands and promoting the biggest corporations on the planet. It is also the home of a sign featuring an ad for naengmyeon, Korean cold buckwheat noodles.

The advertisement, displayed Dec. 13, promotes the Neungrado restaurant on a billboard bedecking the Reuters Building. Neungrado was founded by a North Korean who crossed the border during the Korean War. Its specialty is Pyongyang-style naengmyeon.

The display features a 90-second video. It opens with a slogan, “Korea is One,” moves to paintings by Kim Hong-do and Shin Yoon-bok - both Korean painters from the Joseon Dynasty (1392-1910) - then to the Taegukgi Korean flag and, finally, to a bowl of naengmyeon.

“It makes me emotional seeing my dream come true,” Kim Young-chul, the owner of the restaurant said in a phone call with a JoongAng Ilbo reporter on Dec. 14th.

Neungrado started in Pangyo, Gyeonggi in 2011 and is now a thriving brand with five branches in Seoul and Gyeonggi.

As Pyongyang naengmyeon became globally famous after the summit between the two Koreas on April, Mr. Kim began to seriously push for electronic billboard time. Due to fierce competition for the space, he only managed to get placement in Times Square in December.

“If there is a chance, I want to invite Chairman Kim Jong-un and offer him Pyongyang naengmyeon comparable to Okryugwan, North Korea’s famous restaurant,” Mr. Kim said.

“The displaced North Koreans who escaped to South Korea inherited the legacy and are continuing to produce delicious traditional Pyongyang naengmyeon,” Kim added. “As North Korea experienced shortages of food, the amount of buckwheat and meat stock in the dish has changed considerably from the original recipe.”

Neungrado was named after a region in Pyongyang where the restaurant owner’s father was born. His father was educated at one of the most prestigious schools in Pyongyang and defected to South Korea during the Korean War. Neungrado was started with a naengmyeon recipe found among a pile of old goods owned by the father, a tale well known in the Korean food industry.

“I am confident that Pyongyang naengmyeon will attract foreigners,” said Kim. “I am currently studying the market situation in the United States to open up a branch in Los Angeles around next year.”