Nike just did it and upgraded its employees

Nike just did it and upgraded its employees 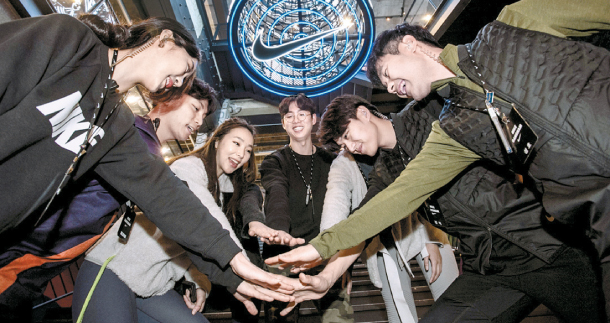 Employees cheer each other on at Nike Korea’s Gangnam branch in southern Seoul. Nike was able to see a significant increase in revenue by converting its irregular workers into permanent employees. [NIKE KOREA]

Nike Korea’s revenue is forecast to exceed 1 trillion won ($884.27 million) in 2018. If all goes as expected, it will be the first sportswear company in Korea to achieve that milestone.

Nike’s annual revenues in Korea have been rising by around 10 percent annually for the last two years, while competitors have only experienced average growth of 3 percent.

Its sales have been strong across the board, both online and offline. But sales at the 15 company-owned offline stores were particularly strong, with revenues rising over 20 percent annually over the past two years.

What’s behind the success? The company believes it was the decision to give permanent-employee status to its irregular workers.

Between November 2015 and May 2016, Nike Korea converted 654 of its irregular employees at company-owned stores to permanent employees.

Prior to that, it had only had 310 permanent workers. The 654 new regular employees earned 20 percent more in wages after the change and gained access to a range of benefits, including tuition assistance for children. Labor costs for Nike Korea rose around 10 percent in total as a result of the move.

Employees say that their new status as permanent workers made them more dedicated to the company.

“Before, I used to say I work at a store when asked about my job, but now that I’m a regular employee, I confidently say I’m working for Nike Korea,” said 25-year-old Cho Hye-rim who works at a Nike outlet in Gimpo, Gyeonggi. “With a new sense of belonging and loyalty to the company, I began feeling a stronger sense of responsibility when dealing with customers.”

“When I first heard that I was going to be a regular employee, I had to pinch my cheeks to check whether I was dreaming or not,” said 34-year-old Hwang Hyun-woo, who works at a Nike store in Myeong-dong, central Seoul. “With my experience working in sales at the store, I plan to try out an office job at the company headquarters as well.”

Very few companies in Korea have converted irregular employees to permanent employees on the same scale as Nike.

Exceptions include Homeplus, which converted around 1,000 cashiers and store assistants into regular workers this year, and SPC Group, which directly hired 800 workers from subcontracting firms.

At Nike, the campaign to offer permanent-employee status to irregular workers was led by CEO David Wook-hwan Song, 48, after he took the top office at Nike Korea in 2015.

He worked with the U.S. headquarters to achieve the transition.

“I expected that performance would naturally improve if employees came together as a team and developed the pride and confidence that comes with being part of Nike, one the world’s best companies,” said Song.

Song, who immigrated to Canada in his last year of high school, was hired by Nike Korea in 1994.

He also earned an MBA from Harvard Business School and worked briefly at McKinsey.

Last year, Nike included Seoul in its list of 12 key cities for growth.