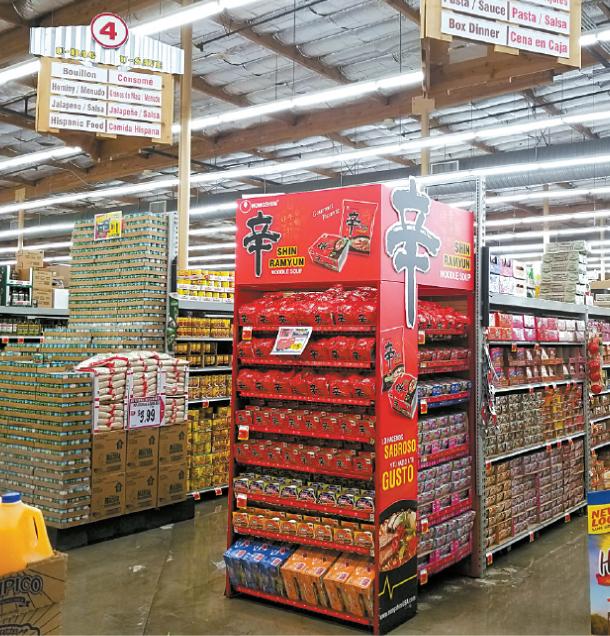 Shin Ramyun is displayed in a Costco store in the United States. [NONGSHIM]

Nongshim is set to break $760 million in global sales this year thanks to the worldwide success of its Shin Ramyun.

The company said Monday that all of its five foreign affiliates, including in China and the United States, grew revenue by double digits compared to last year and are anticipated to set record earnings this year.

In total, export sales and revenue from overseas offices is expected to total $760 million, an 18 percent increase from 2017. Shin Ramyun also set a record of $280 million in annual sales.

The Chinese office topped the list with annual revenue standing at $280 million, setting a new record in the foreign market. This was a 23 percent increase year on year compared to last year, when Nongshim, like other Korean brands, saw sales drop in the aftermath of Korea’s installment of the U.S.-led Thaad antimissile system. 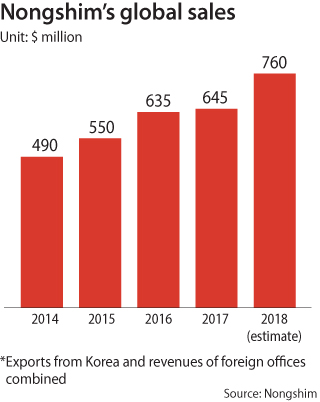 Another notable achievement came from the United States. The company’s sales from big-name retailers like Walmart, Costco and Kroger surpassed that of small Asian supermarkets for the first time since 1971, when it first started exports there. For decades, Nongshim’s dominant retail channel in the United States was Asian supermarkets as its main consumers in the country were Koreans living there.

The U.S. office’s annual revenue is estimated to reach $225 million, a 12 percent increase year on year.

“The ratio of revenue from Asian supermarkets versus mainstream grocery stores was five to five until last year, but this year it’s more like four to six,” Nongshim said.

In the last decade, Nongshim has been aggressively pushing talks with major discount chains to expand in the United States. In 2017, it succeeded in becoming the first Korean food company to place products at all of Walmart’s 4,000-or-so branches, which Nongshim says played a big role in this year’s 34 percent sales increase.

Nongshim is already a leading player in the local instant noodle market with a share of around 55 percent. The drive to expand global sales is driven by concerns that there is little room left to grow in the local market.