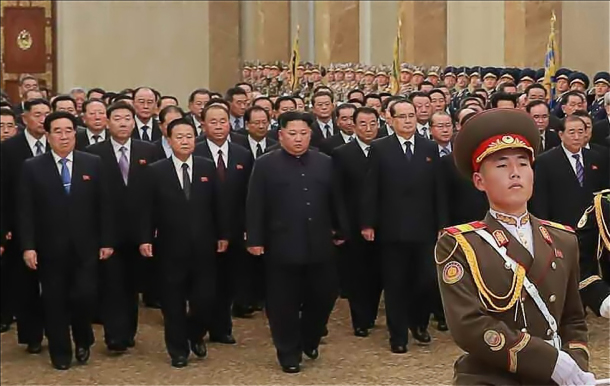 North Korean leader Kim Jong-un made his first public appearance in two weeks on Monday paying tribute to his father - the country’s former leader Kim Jong-il - on the seventh anniversary of his death, reported the North’s state media.

The Rodong Sinmun, North Korea’s leading state newspaper, said that Kim Jong-un laid wreaths in front of the statues of his father and grandfather, the country’s founder Kim Il Sung, at the Kumsusan Palace of the Sun, and paid respects to their embalmed bodies on the country’s “greatest day of memorial.”

“Our party has adhered [to] the idea and line of Kim Jong-il and his revolutionary principle and has resolutely struggled to carry out his last instructions for the last seven years,” Kim Jong-un said in a memorial address.

He called upon party members to fulfill their “obligation and duties as his revolutionary soldiers in the future too, so as to dynamically struggle to implement his plan and desire to the last without an inch of deflection and any concession.”

Kim has not appeared in public since Dec. 3, when he visited a shoe factory in Wonsan, as Pyongyang’s dealings with Washington over denuclearization have reached an impasse in recent days.

His message, analysts say, may suggest the North intends to stick to its position of gradually dismantling its nuclear program if matched by economic rewards from Washington.

Accompanying Kim Jong-un was nearly the entirety of the Korean Workers’ Party’s Central Committee, according to the Rodong Sinmun. Shown around him on the paper’s front page were figures like Choe Ryong-hae - described by the U.S. Treasury Department as the No. 2 official in North Korea and who was recently sanctioned for human rights abuses - and Ri Su-yong - reportedly the country’s top foreign affairs official.

The memorial ceremony came at a time when recent news from the isolated country indicates potential challenges to Kim Jong-un’s legitimacy have effectively disappeared.

Kim Song-ae - the mother of two sons and two daughters by the country’s founder - was a powerful figure in the North during the later years of Kim Il Sung’s rule when she led the Korean Democratic Women’s Union - a mass state-run women’s organization - during its peak in influence from 1972 to 1998.

She often accompanied her husband on foreign trips and acted as the country’s first lady - effectively the only person to carry out such a role until Ri Sol-ju began to be referred to as such by state media since this April.

A prominent defector-turned-writer in South Korea described Kim Song-ae as the “mirror image of Jiang Qing,” the powerful wife of China’s strongman Mao Zedong who spearheaded much of the turbulence during that country’s Cultural Revolution in the ‘60s.

Kim Song-ae’s power inevitably brought her into conflict with her stepson and the country’s heir-apparent, Kim Jong-il, whom she reportedly attempted to supplant with her own eldest son, Kim Pyong-il, in the early ‘70s.

But Kim Jong-il’s control over the state’s propaganda apparatus allowed him to defeat such a challenge, and by 1974 he assumed total control over the party and became the de-facto co-ruler of the country along with his father.

After Kim Il Sung died in 1994, Kim Song-ae was ostracized from the North’s ruling establishment and relegated to obscurity, though she outlived her stepson, who died in 2011.

The same fate befell her children. Kim Pyong-il has effectively been in exile since 1988, when he was appointed North Korea’s ambassador to Hungary, and now serves as ambassador to the Czech Republic.

But recent history suggests they were the lucky ones.

To shore up his legitimacy following his rise to power, Kim Jong-un ordered the execution of his uncle, Jang Song-thaek, and the assassination of his half-brother, Kim Jong-nam, early last year - practices referred to by North Koreans as “cutting off the side branches” of the Kim family tree.