Railway groundbreaking is still being planned

Railway groundbreaking is still being planned 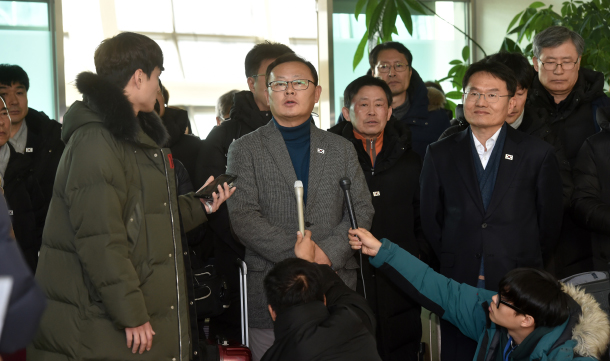 The inspection team of South Korean officials and experts hold a press conference in Goseong County, Gangwon, after returning home Monday from a 10-day survey of the North’s railways on the eastern coast. [NEWS1]

South Korea will send its officials to Kaesong this week to prepare for a Dec. 26 ceremony to break ground on a project to connect the two countries’ railways, the Unification Ministry said Monday.

Their visit follows that of a 28-member inspection team made up of South Korean officials and experts who returned home on Monday following a 10-day survey of the North’s railways on the eastern coast, said Baik Tae-kyun, the ministry’s spokesman, in a regular press briefing.

The advance team will coordinate with North Korean officials to hold the groundbreaking ceremony at Panmun Station in Kaesong - where the two countries’ railways meet - as part of a plan to modernize the North’s rail lines and roads and connect them to the South’s.

Around 100 officials from each side are slated to attend, though the ranks and positions of the participants, as well as the event’s precise schedule, have yet to be determined.

The ambitious rail modernization project was one of the central agreements reached by South Korean President Moon Jae-in and North Korean leader Kim Jong-un during their historic first summit in the truce village of Panmunjom last April.

To break ground on the project before the end of the year, as was decided by the two leaders during their third summit in Pyongyang last September, the two Koreas conducted a joint preliminary review of 2,600 kilometers (1616 miles) of the North’s rail lines starting from Nov. 30.

A South Korean train connected to a North Korean one carried the inspectors first along the western coast, from Kaesong to Sinuiju on the Yalu River, until Dec. 5. The team then surveyed the conditions of the North’s 800-kilometer eastern rail line starting from Mount Kumgang on Dec. 8 until they reached its northeastern terminus on the Tumen River on Monday and returned home.

“Our inspections from Mount Kumgang to Anbyon were conducted on buses since that line was greatly outdated having only been renovated once in 1997,” a Land Ministry official who led the team told reporters after crossing the border into the South. “Train speeds from Anbyon to the Tumen River were around 30 kilometers per hour (19 miles per hour), and the poor condition of the tracks made traveling at high speeds impossible in our view.”

The official added that the conditions on the eastern line were just as outdated as the western one, and that the North’s rail officials were unexperienced in railway construction.

But the symbolic value of the trip was not lost on the inspectors. “We also stepped onto a bridge connected to Russia on the Tumen River that no one [from the South] has gone on before,” the official said. “I speak on behalf of all 28 of us that it was a great honor to conclude the survey at the border bridge.”

This was the first time a South Korean train ran on the North’s rail lines since the 1950-53 Korean War.

The northernmost point on the South’s rail lines since then was Dorasan Station, which served a largely symbolic purpose save for a brief year of activity between 2007 to 2008 when freight trains carried industrial materials and finished goods back and forth to and from the Kaesong Industrial Region - a joint venture between the two Koreas shut down in 2016 due to the North’s provocations.

After the liberals took control of South Korea’s government last year, Moon signaled a desire to reopen the industrial park in tandem with expanded economic cooperation with the North through enterprises like the railway construction.

But with international sanctions in place against North Korea due to its repeated nuclear and ballistic missile tests, it remains uncertain whether the railway project - not to mention the larger plans - can take place since it would require a transfer of industrial materials to the North banned by UN Security Council Resolution 2397.

The Unification Ministry’s spokesman said that the South’s officials are in constant communication with U.S. officials about the issue, particularly regarding whether the groundbreaking ceremony violates the sanctions. A working level discussion between South Korea and the United States scheduled for this week could decide the outcome of the ceremony.