Crematoria are needed but not always wanted

Crematoria are needed but not always wanted 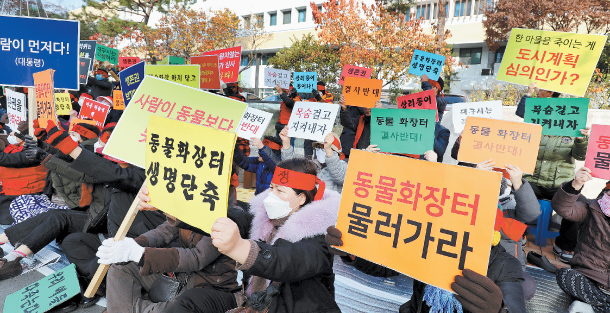 Over 100 residents of Seo District, Daegu, on Nov. 28 protest the construction of a pet crematorium in their neighborhood. The day of the protest was the day the Seo District Office was to deliver its decision about the request. [NEWS1]

How to dispose of pets who go to their maker is a growing problem for Korea, with the number of pets now exceeding the 15 million mark.

According to Kim Hyeon-jung, a researcher for the Korea Rural Economic Institute, a total of 14.81 million people are pet owners as of last year. It is estimated that out of 19 million households nationwide, 29.4 percent (5.7 million) own 8.7 million pets (6.2 million dogs and 2.4 million cats).

As the number of pets increase, so has the need to deal with animal carcasses. Under the current Animal Protection Act, the carcasses should be either cremated or disposed of in garbage bags.

The Ministry of Agriculture, Food and Rural Affairs has estimated that, as of last year, a total of 688,000 animal carcasses were thrown away. If the pet has died in an animal hospital, it is cremated and its remains are treated as medical waste. Burning, burying or even throwing the carcasses away in dumpsters is illegal.

Pet owners who feel uncomfortable about throwing beloved pets away in trash bags turn to pet cementation services. Pet funeral homes provide an array of services including cremation and providing urns with the pet’s ashes.

“I recently had to say goodbye to my pet. The pet hospital recommended a nearby animal funeral house, which I eventually chose to use to properly send [my pet] off,” said Lee Ji-yun, a pet owner who lives in Daegu. 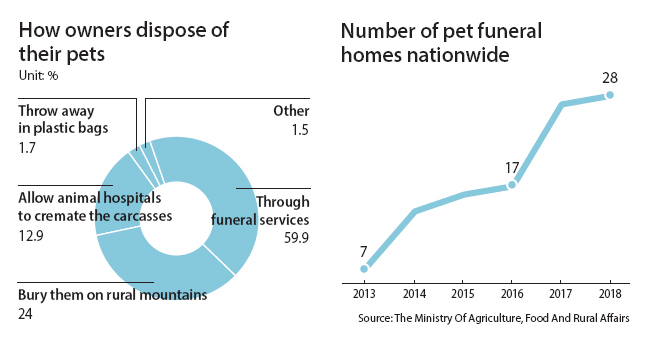 “I couldn’t bear thinking about throwing my beloved pet away in a trash bag.”

The problem with building animal funeral homes is the opposition that comes from neighborhoods.

“It is normal for neighbors to oppose such an unpleasant facility because it could possibly taint the neighborhood’s image and bring down real estate prices,” said Kim Young-soon, a professor of law at Inha University. “The possibility of air and water pollution has also been raised.”

The construction of Daegu’s first pet crematorium was called off after protests from neighbors. Luckily for them, the Animal Protection Act was revised to prohibit any animal funeral facility from being built within 300 meters (984 feet) of a school. The pet crematorium was going to be built 192 meters from Gyeseong High School.

In June, a crematorium operator in Gwangju filed for a permit to build a two-story pet crematorium in Gwangsan District. Neighbors organized a petition against the facility. Areas like Yongin and Yangpyeong County have seen similar disputes regarding funeral homes for animals.

According to the Animal and Plant Quarantine Agency, because of local opposition, the number of animal funeral homes in Korea, which is 28, is strikingly low compared to countries like Japan, where there are 520.

Even if all the animal funeral homes in Korea manage three to 10 funerals per day, only 15 percent of animal carcasses can be disposed of annually.

“An increase in demand is expected for services to take care of animal carcasses,” said Kim. “However, first a measure that will reduce the conflict between the pet funeral home operators and the residents needs to be established, like an obligatory briefing session regarding the animal funeral home.”