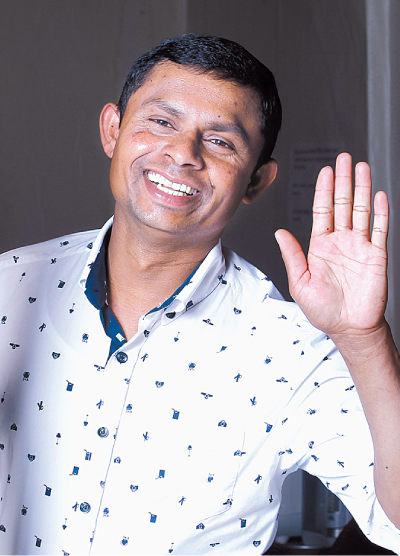 Katabilla Ketiye Ge-dara Nimal Siri Vandara, a Sri Lankan man who was recently granted permanent residence in Korea for his heroism after saving an elderly woman from a fire, smiles and waves in a photograph from 2017 in his then home in Daegu. [GONG JEONG-SIK]

The 38-year-old Sri Lankan man who risked his own life to save a 90-year-old woman from a burning house was granted permanent residence in Korea, the Ministry of Justice announced Sunday.

The ministry said it decided to grant Katabilla Ketiye Ge-dara Nimal Siri Vandara, an illegal migrant worker, an F-5 permanent residency visa for his efforts to save the woman last February in Gunwi County, North Gyeongsang.

He worked at an orchard during the day and at a factory at night, sending much of what he earned back home to his parents.

Vandara was working at an orchard in Gunwi County on Feb. 10 when he saw a house on fire. Without hesitation, he ran inside the house and rescued the 90-year-old woman, carrying her outside.

The elderly woman wasn’t injured thanks to the speedy rescue. But Vandara was hospitalized for a month after sustaining second-degree burns on his neck, wrists and head. His lungs show signs of pulmonary fibrosis.

The LG Foundation awarded Vandara a civilian hero title and 30 million won ($26,500) in March. He is the first foreigner to win that title from the foundation.

The Ministry of Health and Welfare in June named him a civilian hero, the first illegal immigrant to be awarded that title.

“I love the Republic of Korea very much,” Vandara told the JoongAng Ilbo Sunday. “I want to give my thanks to all Korean people.”

Vandara would have been deported from Korea by the end of the year because the fact that he was illegal was revealed during the rescue process.

His father suffers from a lung condition and his mother underwent surgery for liver cancer three months ago. Vandara has been sending most of his earnings home to pay for his parents’ hospital fees.

Now that he has permanent residency, Vandara wants to take a trip home.

“I’m going to visit my father in Sri Lanka,” he said. “His lungs are in bad shape, so he has trouble breathing. He misses me, so seeing my father is most urgent.” He hasn’t seen his family in 15 months.

When asked what his future plans were, Vandara replied that he has been having a hard time finding jobs at factories lately and that he currently only works one day a week. “I hope I can work a lot,” he said.

Arriving in Korea in September 2013, he initially worked at chemical plants in Incheon and Daegu but began working in the Gunwi County orchards after his visa expired.

Vandara said he has recovered from his burns, but his lungs still bother him.

“When the weather is cold, I cough a bit,” he said. “I’m going to the hospital to get treated and [be] prescribed medicine.”

If faced with the same situation, Vandara said, he wouldn’t hesitate to run into the burning house. “I will do the same now if someone is in danger,” he said.

Vandara expressed his thanks to his attorneys, the media, firefighters, the LG Foundation, the Korea Immigration Service “and those who I do not know the names of but I pray for.”