Korean Olympic short-track champion Shim Suk-hee testified against her ex-coach in an assault case on Monday, saying she wanted the truth to come out and justice to be served. 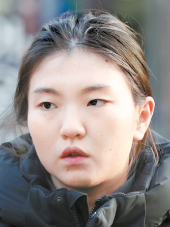 Shim fought back tears as she read from a note during an appeals trial of her former coach Cho Jae-beom at the Suwon District Court in Suwon, Gyeonggi.

Cho received a 10-month prison term in September for physically assaulting Shim and three other skaters, but he appealed the decision.

Shim said on Monday that she had only been giving her statements through her attorney because she didn’t want to face Cho in court but added that she decided she needed to tell her side of the story in person.

Shim alleged that Cho had been abusing her physically and verbally since she was in elementary school.

“When I was in fourth grade, I suffered broken fingers after getting struck by an ice hockey stick,” Shim said. “Once I got into middle school, he became even more violent. He dragged me into confined spaces to beat me up mercilessly, and other athletes suffered ruptured eardrums and other injuries.”

Cho was charged with assaulting Shim and three other skaters between 2011 and January 2018. An incident involving Shim came to light in mid-January, just weeks before the PyeongChang Winter Olympics, when Shim left the national team training facility, apparently to avoid further assaults by Cho.

“Before the PyeongChang Olympics, he kicked and punched me so hard that I thought I was going to die,” Shim said. “I had a concussion afterward, and I fainted and fell down during the Olympics because of that.”

Shim also said Cho kept the skaters from telling their parents or others about these incidents.

“I hope he will be punished so severely so he won’t be able to do these things again,” Shim said.

Shim also accused Cho of changing her skate blades without her knowledge prior to World Cup races in the buildup to the PyeongChang Olympics so that another skater on the national team would outperform Shim.

Shim also said Cho had private lessons with that particular skater during the Olympics, even though he had already been banned by the KSU.

Shim is a two-time Olympian with four medals - two gold, one silver and one bronze - to her credit. Skating just weeks after the alleged assault, Shim helped Korea to the gold in the women’s 3,000-meter relay. It was her second consecutive gold in the relay event.