Chronicling life through comics: Artist Chang Hye-won gets inspiration from her own experiences

Chronicling life through comics: Artist Chang Hye-won gets inspiration from her own experiences 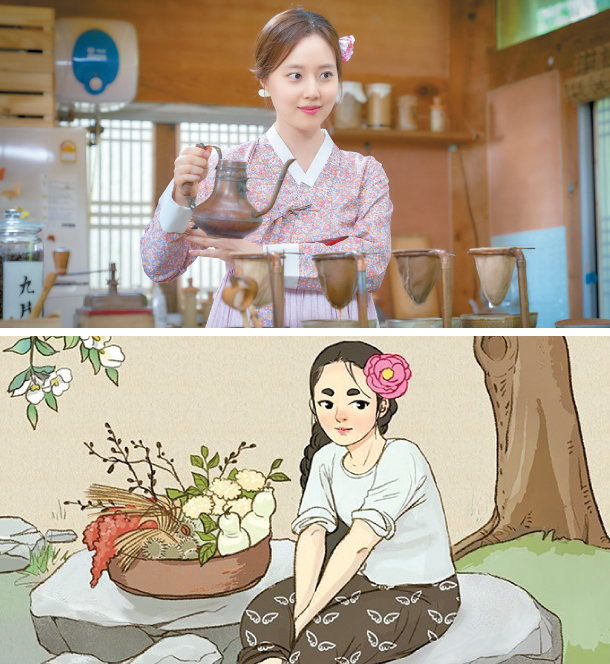 Actor Moon Chae-won, top, plays the fairy Sun Ok-nam in tvN’s “Mama Fairy and the Woodcutter.” The series is an adaptation of a web comic that goes by the same title. [TVN, SCREEN CAPTURE]

Many popular television series these days are adaptations of popular web comics, including the currently airing tvN drama “Mama Fairy and the Woodcutter.” The series tells the story Sun Ok-nam, a 699-year-old fairy from Gyeryong, played by actor Moon Chae-won, who lives on Earth after having her winged clothes stolen by a hunter. The fairy lives in the 21st century as a barista who mesmerizes people with her excellent coffee-making skills. The story comes from the Korean fairy tale “A Fairy and a Woodcutter.”

“I wanted to make her appear cool,” says the webtoon artist Chang Hye-won, who goes by the name Dolbae.

“In the beginning, I imagined a fairy who sells cucumbers. Then, I changed her profession to a rice soup cook. But ultimately, I wanted this fairy to appear ‘cool,’ so I turned her into a barista.”

Although Chang hoped to make a movie adaptation of the series while working on the web comic, the drama series “is still very well-made.”

Chang’s ultimate goal is to make readers happy. She wants readers to laugh and have fun while reading her web comics, which is harder to achieve than one might expect.

The Korea JoongAng Daily met with the artist to discuss her works and her experience as a web comic artist. The following are edited excerpts from the interview. 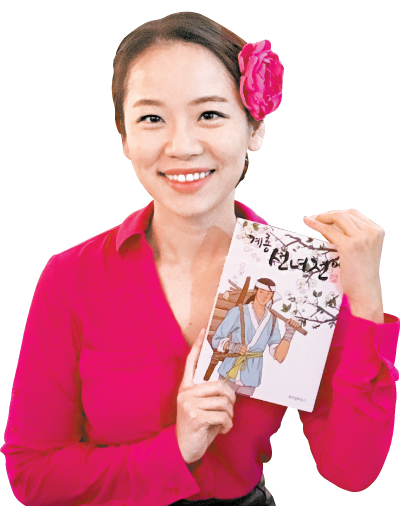 Q. Both your bachelor’s and master’s degrees are related to animation. When did you become interested in the field?

A. I was interested in comics at first. But people used to tell me that I would starve if I pursued a career in comics, so I thought I should just leave it as a hobby. The alternative was animation - at the time, I thought that it was similar to comics, so I decided to pursue my dreams in that field. Now I know that they are two different fields.

I started studying animation during my sophomore year of college. A professor who had previously worked in Disney taught us about the art of movement, which was very interesting to me. Thankfully, I enjoyed studying and working in animation.

You earned your Master’s degree in 3D animation at the Academy of Art University and then worked at four different web game companies in San Francisco. Were you interested in web games? What made you decide to work for online gaming companies?

No, I wasn’t really interested in web games in the beginning - in fact, I didn’t like games. My first job was at a small film company, but it went broke. I needed a working visa at the time in order to stay in the United States, so I was desperately looking for a job. Then I applied for a web game company by chance, and that’s really how I continued working as an animator. Although I didn’t like games, I liked my job as an animator.

[The reasons I moved companies so much was because] some of them went bankrupt. The second company I worked in merged with a bigger company, and I ended up working there [for more than five years.]

You started publishing your first webtoon “San Francisco Hwa Rang Kwan” in 2013 while you were living in San Francisco. The lead character in the series attends a U.S. college, works at an IT company in San Francisco and learns taekwondo. Was it based on your experience there?

Yes, it was more like a diary - I didn’t want to forget my special experiences back when I first learned taekwondo, so I decided to record [them] in a webtoon.

My early moments as a beginner - back when I had a white belt - were very special to me. That was when I knew nothing about taekwondo, but thanks to the people around me, I was able develop myself and become a skilled person.

But the series, of course, is not a full reflection of my own experience; I have incorporated new characters and an imagined plot in the story. The lead character, for instance, starts attending the martial arts center by coincidence, but I had found the place online [because I wanted to learn the martial arts.]

Weren’t you busy, working, learning taekwondo and publishing the series at the same time?

I was busy when I started learning taekwondo. I went to my office around 9:30 a.m., finished at 6 p.m., attended the taekwondo class at 6.30 p.m., and after I got home around 9 p.m., I ate and drew at the same time until midnight. I drew all day during the weekends as well.

Your latest webtoon “After the Break-up, Running” is about running. You must really enjoy sports.

Yes, I’m not good at sports, but I enjoy them a lot. Running was one of my regular activities, but recently I started learning Muay Thai, so I don’t have much time to run. I haven’t done taekwondo [since I came back from the United States] two years ago because there aren’t a lot of taekwondo classes for adults here.

Your most popular fantasy romance series “Mama Fairy and the Woodcutter,” which is currently airing as a drama on tvN, is very different from your other works. How did you come up with the topic?

I was doing a half marathon on Jeju a few years ago and was running along a dreamy village in Seogwipo on a misty day. I coincidentally saw several older people drying chili peppers on the ground. Then I thought, what if those elders were fairies who had come down to Earth? I started to create characters and a plot in my head while running. I imagined a strong, mama fairy from 600 years ago who had a daughter who is actually a tiger and so on. I wrote it all out when I arrived home after the marathon.

The series features a lot of themes like romance, forgiveness, resurrection and the fight between good and evil. What were you trying to portray through the series?

First off, I wanted people to like this interesting fairy character, and just enjoy my story as a whole - I mean, it is actually really interesting.

Also, my story features a lot on contradictory themes, such as the old and the new, the religious and the scientific, and the past and the modern. I learned in taekwondo that the physical body and the mind are not separate, but the same. When you are physically weak, you feel mentally tired as well. The same applies the opposite way: it’s just like yin and yang. I wanted to portray that in the series. Rather than splitting up the boy and the girl and the past and the modern and arguing which one is the best, I wanted to show that new values can be created when the two go hand in hand.

Who is your favorite character in the series?

Jeom Soon-yi (the tiger daughter of the fairy). I love cats and tigers. She is one of the earliest characters that I created, right after creating Sun Ok-nam. I love this character so much that I only wanted to talk about her throughout the series.

The series has been adapted into a drama, and is currently airing on tvN. But the adaptation does not match the web comic 100 percent. How do you feel about the drama?

I’m really enjoying the drama actually. I think it’s very well-made. The webtoon is not an easy one to adapt into a television series.

But one thing that bothers me a little is the animation. As an animator, I’m very strict about animation. The lighting, modeling and rendering in the series were all good, but the animated part - that, I wish I could do it myself. Animating usually takes a lot of time - maybe a lack of time was the problem.

What kind of genres would you like to try next?

Maybe sci-fi. Or fantasy. Or horror - I want to try everything. Maybe [a story] with another sports theme. I would like to try a web comic series about ssireum (Korean wrestling). I am from Daegu, and many people from North Gyeongsang enjoy watching ssireum competitions. Whenever I go to my hometown during Chuseok (Korean Thanksgiving) or New Years, my family members are always watching those competitions. It’s really fun.

There are a lot of young people who dream of becoming a web comic artist these days, but it’s hard to become an exceptional one. As an artist who has been involved in the field for a long time, what advice would you give to those dreamers?

Don’t be too frugal with your art tools. Stay healthy all the time. To be honest, there is no right answer to becoming a great web comic artist.

You don’t need to become a professional web comic artist. You can be an amateur and still create excellent web comics.

For me, I thought I was successful when I drew the first episode of “San Francisco Hwa Rang Kwan” because my dream was to draw cartoons in my free time after going home from work.

Just enjoy what you do - don’t force yourself to draw.