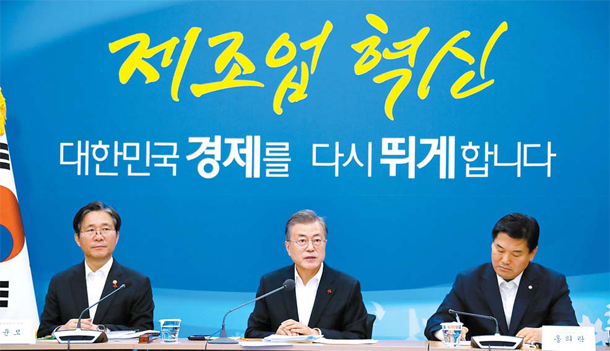 The Ministry of Trade, Industry and Energy announced it plans to invest 3.5 trillion won ($31 billion) in auto parts developers, and offer other support, in an effort to boost the production and distribution of environment-friendly vehicles.

The target is to have 20 global Korean auto parts companies by 2022 with annual revenue totaling 1 trillion won. The ministry also hopes that the production of environment-friendly cars will reach 10 percent of all automotive production in the country.

Support of the auto parts industry is also expected to contribute to the creation of jobs.

The ministry included the plan in a key report on 2019 projects delivered to President Moon Jae-in on Tuesday.

A total of 14 major projects in four regions were proposed by the ministry. The regions targeted were: North Jeolla, which has been struggling since GM closed its plant in Gunsan in May; Busan and South Gyeongsang, which are facing difficulties on headwinds in shipbuilding and auto making; Gwangju and South Jeolla; and Daegu and North Gyeongsang, facing difficulties as textile and electronics companies relocate overseas and on challenges in the auto parts industry.

The goal is to replace or update businesses and facilities that are outdated with new industries, including those related to hydrogen-fuel-cell vehicles and electric vehicles, semiconductors and smart technologies.

If all goes as planned, the government expects that by 2022 roughly 26,000 jobs will be created.

“We are trying to overhaul the equipment and materials industries,” said Industry Minister Sung Yun-mo. “We are still heavily dependent on key parts and materials and lack in investment on equipment.”

The minister said the government will be investing 5 percent of the government R&D budget every year, or 1 trillion won, so that Korean-made equipment and materials can be globalized.

The ministry is placing an emphasis on automobiles and shipbuilding.

“These are industries that have the largest employment, have huge economic effects and are thus very important to the nation’s economy,” Sung said. “Along with short-term solutions - such as encouraging people to switch outdated vehicles, ordering LNG-fueled ships and liquidity support - we will push forward with future cars and future ships in meeting the industry trend for more environmentally-friendly and smarter products.”

The minister focused particularly on the government’s support of hydrogen fuel-cell automobiles. The first step is aiding the auto parts industry.

In recent years, car manufacturers have been struggling. The sector made 4.56 million units in 2015 and is expected to produce about 4 million this year.

Eco-friendly car development is expected to help the sector turn around.

The government plans to invest 2 trillion won in environmentally-friendly and autonomous vehicle core parts while supporting 160 people in their pursuit of relevant master’s degrees.

It will also be lifting regulations that could restrict development, such as the ban on hydrogen fuel-cell stations within the 200 meters (656 feet) of schools.

During the meeting, President Moon requested that the ministry closely listen to criticism so that it can develop policies that could usher in a manufacturing “renaissance.”

“Some have said that the government has no industrial policies,” Moon said. “If we continue on this path, our industrial ecosystem will collapse. The government needs to reflect on such criticism.”

He said the government has to question whether it has properly considered questions raised by industry.

The president asked for the help of the private sector and labor unions. He said that government policies designed to support the upgrading of Korea’s manufacturing - including R&D, financial aid and training - can only be effective with the support of the private sector.

“Last week, Hyundai Motor announced co-existence measures whereby it will provide 1.67 trillion won of financial aid to auto parts suppliers, while Samsung Electronics is supporting smart plants for SMEs. In Busan, I am told that Renault Samsung Motors is signing an agreement with Dongshin Motech, an SME, in commissioning the production of the compact EV Twizy,” Moon said.

“For the innovation of manufacturing, labor unions, companies, local governments and the central government need to join hands and give in a little so that a social agreement can be made and a model of co-existence achieved,” he added.