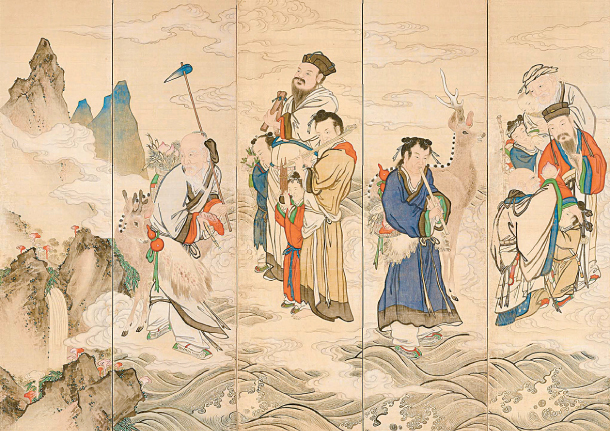 Through Sunday: The people of Joseon (1392-1910) loved folding screens and an array of them can be witnessed at the “Beyond Folding Screens” exhibit at the Amorepacific Museum of Art. The underground museum displays some 76 folding screens, including the famous “The Sun, Moon and Five Peaks,” which was used as an emblem of the royal authority during the dynasty and was always placed behind the king.

There are large folding screens on display that measure up to nearly seven meters (23 feet) in length, such as the screen depicting Mount Kumgang at the entrance of the exhibit.

Through Dec.30: The solo exhibition of British artist Darren Almond features four pieces of his best-known photo series “Fullmoon,” as well as two pieces of his latest series “Reflect Within,” which are paintings of numbers on mirrors, and related drawings.

To capture the calm and contemplative seascapes in the “Fullmoon” series, the 47-year-old artist used “an exposure of between 15 and 50 minutes under the reflected light of the full moon.”

“The duration of exposure is the duration of time and experiences. [My] landscapes are a means of bringing back memories,” he said.

The artist added that his works are connected to “an inquiry into the concept of time,” and his latest “Reflect Within” series, inspired by a train station’s flip clock, are also about time.

Admission is free. The gallery is located near the Blue House. Go to Anguk Station, line No. 3, exit 1, and walk for 15 minutes.

Through Jan.19: The solo show of Lee Dongi, who is regarded as Korea’s quintessential pop artist - though he rejects the label - focuses on the artist’s “Eclecticism” series and “Abstract Painting” series, rather than his “Atomaus” series, which brought him fame in the 1990s.

The “Eclecticism” series combines diverse images of comics, ad campaigns and propaganda with images in an abstract expressionist style.

The “Abstract Painting” series are compositions of Ben-Day dots and mosaics of color fields, which look like a magnified magazine page, while at the same time like a pure abstract painting.

Admission is free. The gallery is located near the Board of Audit and Inspection of Korea on Bukchon street.

Through Jan. 20: The first-ever solo show of British artist Fiona Rae in Korea is the inaugural exhibition of the new Cheongdam-dong branch of Hakgojae Gallery. The 11 paintings by Rae on view are characterized by the “mixture of high culture (abstract art) and low culture (cartoons and other abstract forms from pop culture),” the artist said. Her works are abstract paintings but, at the same time, portraits of characters in pop culture.

Admission is free. The gallery is a 15-minute walk from Cheongdam station, line No.7.

Through Feb. 6: The retrospective of Yun Hyong-keun (1928-2007), which had been originally scheduled to wrap up on Dec. 16, has been extended to celebrate its tour to Venice during the period of the prestigious Venice Biennale next year. The MMCA said on Dec. 11 that it agreed with Fortuny Museum, an art museum in San Marco, in central Venice, to hold the exhibition from May to November 2019.

The retrospective features Yun’s famous paintings hovering between Western abstract painting and East Asian ink calligraphy. In addition, there are also his paintings, drawings and materials that reveal little-known aspects of the well-known painter who belonged to the 1970s and ’80s movement of dansaekhwa, or Korean monochrome paintings.

The exhibition shows a reproduction of Yun’s actual atelier, which includes works by his teacher and his father-in-law, Kim Whanki (1913-1974), and by American minimalist Donald Judd. Yun and Judd respected and bought each other’s works, the museum said.

Through March 3: The exhibition brings together photographs, paintings and sculptures by 14 artists - among them illustrator Bae Sung-tae, webtoon artist Dolbae and photographer Lee Yong-han - to celebrate their special connection to cats.

These artists portray cats in their own creative ways - some of these furry animals are wearing hanbok (traditional Korean dress) and some of them are dressed like Hollywood stars. 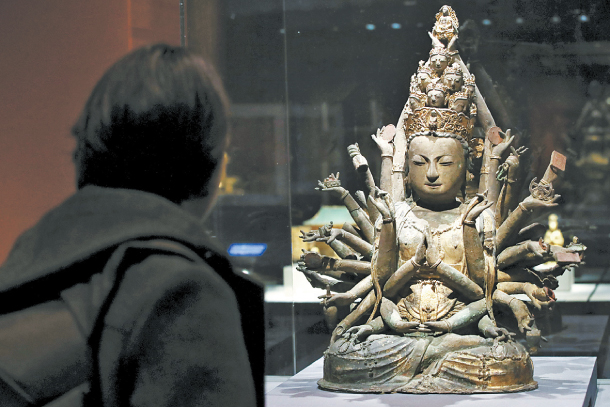 GORYEO: THE GLORY OF KOREA

Through March 3: As 2018 marks 1,100th anniversary of the founding of the Goryeo Dynasty (918-1392), the National Museum of Korea has organized a grand exhibition that allows visitors to learn more about the dynasty that has been somewhat out shadowed by other eras like Goguryeo, Baekje, Silla, and Joseon. Some 450 artifacts from 56 different organizations and institutions from both Korea and abroad - including the United States, England, Italy and Japan - are on display, including the Statue of Master Huirang, which is Korea’s Treasure No. 999 and belongs to Haein Temple in Hapcheon, South Gyeongsang. Unfortunately, the statue of Taejo Wang Geon - the founder of Goryeo - that belongs to North Korea could not make it to the exhibit.

Goryeo was established by King Taejo, or Wang Geon in 918, at a time of division and disintegration of nations. The dynasty persevered for some 500 years and during the time it had active exchanges with neighboring countries and developed a unique and cosmopolitan culture. 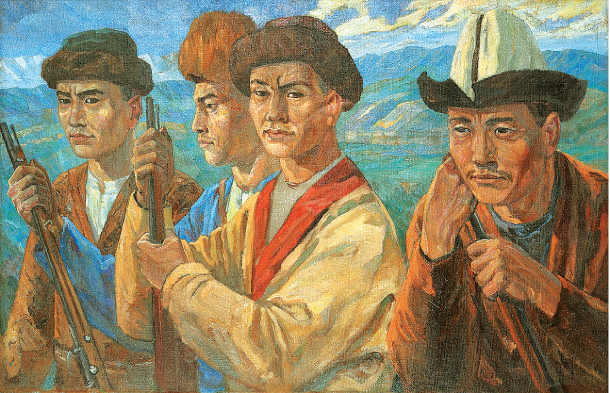 Through March 3: Not many Koreans are familiar with the fact that Kazakhstan is the ninth-largest country in the world.

“Focus Kazakhstan,” as a part of the state-led project by the Kazakhstani government to spread their culture to the world, is currently held in four cities around the world: London, Berlin, Jersey City and Suwon.

A total of 400 pieces of modern and contemporary art by 90 artists are on display on the whole, including the 110 works by 50 artists that have flown to Korea.

The list of artists include some of the most important figures in the Kazakhstani history of art, including Pavel Zaltsman, Eugeny Sidorkin and Sergey Kalmykov, as well as contemporary artists such as Alexander Ugay and Said Atabekov.

The exhibition is a chance to learn about the Central Asian nation by looking at the art works that embody the historical and social turmoil they went through in the latter half of the 20th century.