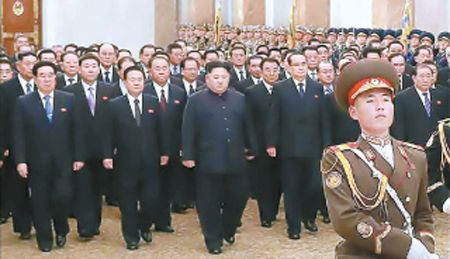 Dec. 17 marked the seventh anniversary of North Korean leader Kim Jong-il’s death and Kim Jong-un’s rise to power, and Pyongyang was still blanketed in snow from the day before. Party executives and residents held quiet memorial events. There were no messages on major issues, including the possibility of Kim Jong-un’s return visit to Seoul within the year, which generated excitement in Seoul over the past few weeks. AP’s Eric Talmadge tweeted: “Snowball fight on Kim Il Sung Square this morning. The girls were fierce” with a video of young girls throwing snowballs at bigger boys. In the winter of 2018, all is quiet in Pyongyang.

Washington is not much different. It is quite unlike a year ago, when articles on the nuclear crisis between North Korea and the United States rolled off the presses. There were even rumors that officials were considering a bloody-nose strike on the North. Interest has subsided. Think tanks no longer hold seminars on the North Korean nuclear threat. In December, the only seminar dealing with the Korean Peninsula was on the domestic policies of the Moon administration at the American Enterprise Institute on Dec. 11. Since U.S. Secretary of State Mike Pompeo made his fourth visit to Pyongyang on October 7, negotiations between Pyongyang and Washington have been stalled and don’t inspire new stories.

An Asian chief at a think tank said that major international news stories for 2019 were discussed at its year-end board meeting, and China was the top topic, followed by Iran’s nuclear and missile threats and issues in the Middle East. He said that North Korea is no longer a priority.

U.S. President Donald Trump is more relaxed now. Despite a lack of progress at the working level, he repeatedly said there was no reason to rush and that things were going well. He said that Kim knows North Korea’s potential for economic growth and would take advantage of the opportunity as much as possible. He expressed trust while not budging on the demand for denuclearization. He said it was OK as long as North Korea does not conduct nuclear tests or launch ICBMs. It is uncertain whether he intentionally makes the other side nervous, but it seems that North Korea is no longer getting his full attention. Instead, the White House and the Department of State officials are focusing on restoring maximum pressure.

Pyongyang and Washington seem to be complacent at the end of the year without major trouble. But the unstable balance won’t last long. The situation on the Korean Peninsula is unchanged, except for the suspension of Korea-U.S. joint exercises and the North’s freezing of nuclear and missile programs. “Irreversible” denuclearization, an easing of sanctions and the improvement of relations will be the objectives for 2019. If Kim wants to bring a breakthrough along with a direct showdown with Trump at a second summit early next year, I hope he presents a specific denuclearization road map in his New Year’s address.