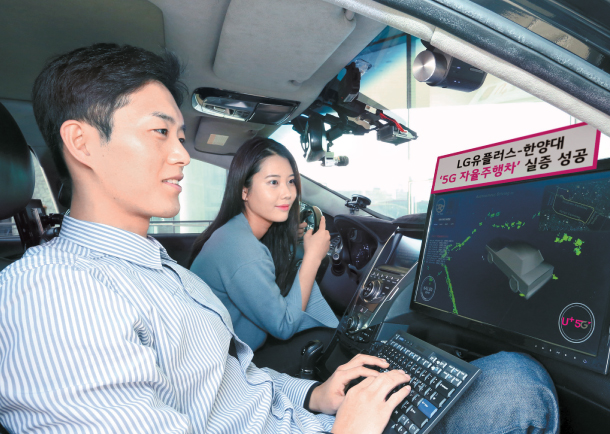 LG U+ employees demonstrate an autonomous car using 5G connectivity in Seoul on Tuesday. [LG U+]

LG U+ has successfully tested a 5G-powered self-driving vehicle on an expressway for the first time.

A low latency video transmitter developed by LG U+ delivered real-time footage of the test drive to Hanyang University. Two cameras attached to the self-driving vehicle recorded the front and rear of the car.

During the test drive, the vehicle had to react to certain scenarios such as avoiding obstacles and changing course. The vehicle was also tested to see how it reacts to new traffic information such as a blocked parking lot entrance.

The vehicle was remote controllable, offering added safety measures in case of emergency.

It was the first time that a self-driving car has completed a test drive on such a scale on an expressway or high-speed road in Korea, according to the company.

“It’s significant that we were able to produce substantial results with self-driving cars through cooperation between industry and academia,” said Kang Jong-oh, who manages future technologies at LG U+. “We will continue to invest our efforts into developing self-driving car technology through cooperation between mobile carriers and the auto industry.”

LG U+ will continue to work with Hanyang University to polish its 5G-based self-driving car technology.