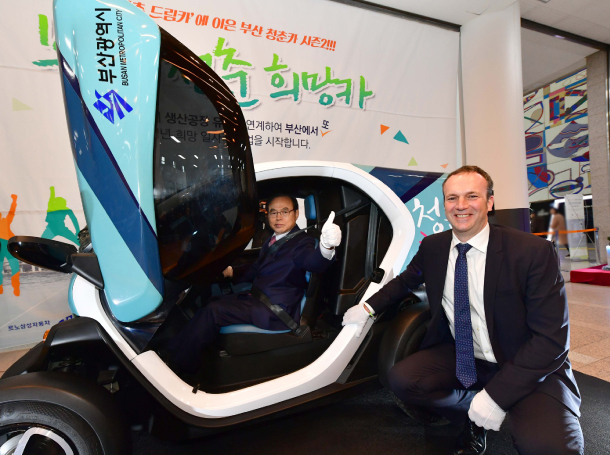 Renault Samsung Motors’ micro electric vehicle (EV) Twizy will be produced in Busan from next year.

The Korean unit of the French carmaker Renault on Tuesday inked a partnership with the Busan Metropolitan City and local car parts manufacturer Dongshin Motech to relocate Twizy production from Valladolid, Spain, to Korea.

The good news is welcome for a car industry that has suffered a tough year with GM Korea shutting down its Gunsan factory and Hyundai Motor still struggling with a plan to create a new joint venture company with the Gwangju government.

“It is a rare opportunity that a foreign car production facility relocates to Korea,” Renault Samsung Motors said in a statement Tuesday. “We expect the factory will create new jobs in Busan and boost the regional economy.”

Under the deal, all Twizys will be produced in Busan for five years starting next September. The lines in Spain will be recreated at a part of Renault Samsung Motors’ Busan factory while local car body maker Dongshin Motech will take charge of the actual production.

According to the Korean carmaker, the Busan factory will eventually have the capacity to produce 5,000 Twizys per year. In the first year of domestic production, however, about 3,000 Twizys are expected to be produced, similar to the production level at the Valladolid factory. Production will gradually increase as the carmaker creates new demand for the micro EV, a spokesperson from Renault Samsung Motors said.

Over the five years through August 2024, the automaker plans to produce and sell 15,000 units of the tiny electric vehicle in domestic and overseas markets.

The Twizy is selling well in Korea. As of November, over 1,400 units were sold domestically, which is nearly 60 percent of the total produced in Spain. While the ultra-compact car has not yet entered the Southeast Asian market, the carmaker plans to use Busan as a base to develop new export markets far from Spain. As Southeast Asian countries like Vietnam and Malaysia depend a lot on motorcycles and electric bikes that are able to get through heavy traffic and traverse narrow roads, the carmaker sees good market potential in the region.

The carmaker and the Busan government are discussing ways to expand sales of Twizy in the region, such as using it for the car sharing industry.