Stage spectaculars celebrate the holidays in style: Ring in the new year with music and more all across the capital

Stage spectaculars celebrate the holidays in style: Ring in the new year with music and more all across the capital 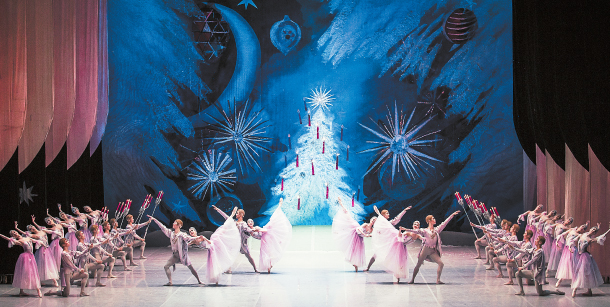 The holiday season is just around the corner, and the city is filled with classic ways to celebrate Christmas and wrap up the year. An array of performances ranging from classical music to ballet and opera are being staged throughout the Christmas and New Year holidays for both adults and children to enjoy. The following are some of this year’s must-see performances in Seoul to help you have a jolly holiday.

For many families and couples, going to see Tchaikovsky’s ballet “The Nutcracker” on Christmas is an annual event. That’s why Korea’s two major ballet companies - the Korean National Ballet and the Universal Ballet Company - have made the show a part of their annual repertory this time of the year. The Korean National Ballet’s “The Nutcracker” is a version by Russian choreographer Yuri Grigorovich, while the Universal Ballet Company’s production is a version by one of ballet’s most influential choreographers Marius Petipa.

At the top of the stairs in front of the Sejong Center for the Performing Arts in central Seoul, a large, red Bearbrick welcomes visitors. Designed by pop artist Im Ji-bin, this gigantic Hug Bear, according to the center, is their Christmas gift to all visitors over this holiday season.

On Christmas Eve, inside the Center’s Sejong Chamber Hall, a classical music concert titled “Christmas Actually” will be staged. Violinist Park Min-jung, accompanied by the SOP (Spirit of Play) Ensemble under the baton of Yuki Mori will perform popular Christmas carols including “Canon,” “Rudolph the Red Nose Reindeer,” “Let it Snow,” “All I Want for Christmas is You,” as well as songs from the Disney film “Frozen.” The concert starts at 7:30 p.m. and tickets cost 30,000 won.

The Seoul Metropolitan Opera is also staging two operas at the center’s new S Theater, which opened its doors in October. The first is a modern opera piece titled “Amahl and the Night Visitors” by Gian Menotti, starting tonight and running for five days. It’s a one-act opera, originally created in English in 1951 to be broadcast live on television. The story centers around a disabled boy named Amahl, and how the Three Kings from the Bible, not Santa Claus, bring him Christmas.

Another opera, “The Old Maid and the Thief,” also by Menotti, will be staged at the S Theater from Dec. 26 to 30. This opera is also a one-act opera, originally created for radio and tells a twisted tale of morality and evil.

“Because these operas are one acts created for television and radio, audiences who are not familiar with opera can come and enjoy them during the holidays,” said Lee Kyung-jae, director of the company. 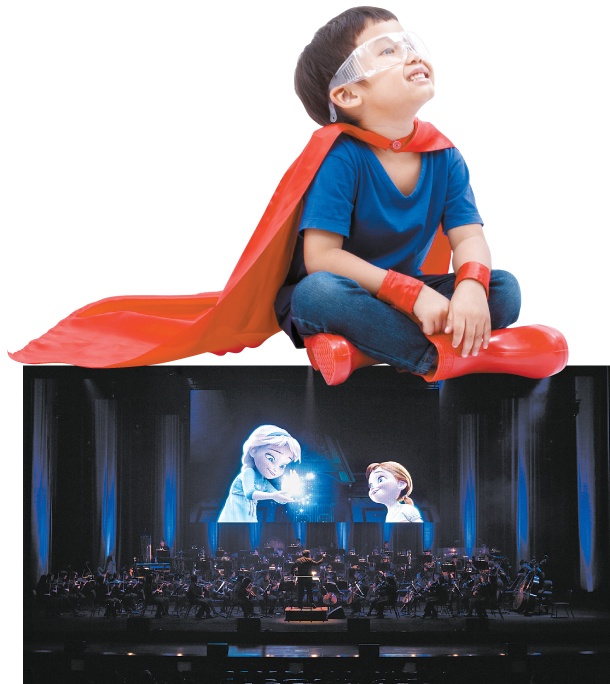 Children can enjoy classical versions of their favorite songs from superhero films as well as Disney’s “Frozen” this Christmas at the Seoul Arts Center in southern Seoul. [CREDIA]

While children may fall asleep during classical performances, they are sure to stay awake while listening to songs from their favorite films.

At the Seoul Arts Center’s Concert Hall on Dec. 23, kids will be able to listen to orchestra versions of “Let it Go” during “Frozen in Concert,” which has been organized by Credia, a classical music agency. The Disney film “Frozen” will be screened while the Ditto Orchestra performs the soundtrack live under the baton of Christopher Byung-uk Lee. The concert starts at 5 p.m. and tickets range from 40,000 to 130,000 won.

If girls use their pester power to go to “Frozen in Concert,” boys will nag their parents to take them to the “Christmas Concert with a Super Hero.” Also at the Seoul Arts Center’s Concert Hall on Dec. 25, the audience is invited to show up in their favorite superhero costumes and listen to an array of popular songs from the soundtracks of superhero films featuring Batman, Superman, Iron Man, and Spiderman, among many others.

There will also be songs from Studio Ghibli films such as “Howl’s Moving Castle” and “My Neighbor Totoro.” The concert starts at 7 p.m. and tickets range from 35,000 won to 55,000 won. 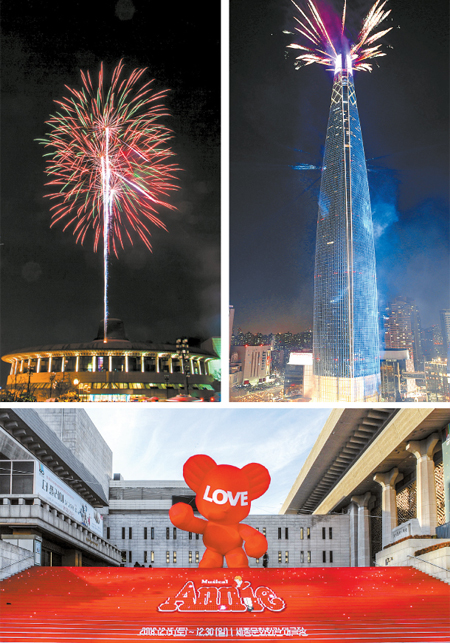 Seoul Arts Center, top left, and the Lotte Concert Hall, top right, in southern Seoul will be holding year-end concerts and countdown events followed by fireworks. A Brickbear installation, above, at the Sejong Center for the Performing Arts in central Seoul has been installed to celebrate Christmas. [YONHAP]

Arts centers in Seoul have been attracting audiences to year-end concerts showcasing magnificent fireworks after the countdown to the New Year at midnight for many years, and this year will be no exception.

At the Seoul Arts Center, “Adieu 2018” will be staged starting at 9:30 p.m. on New Year’s Eve. The Gangnam Symphony Orchestra, under the baton of Chung Chi-yong, will perform music from operas including “The Merry Wives of Windsor” overture by Nicolai, “Si, Mi Chiamano Mimi” from opera “La Boheme” by Giacomo Puccini, prelude to act three from opera “Lohengrin” by Richard Wagner, among many others. Soprano Seo Sun-young, tenor Kang Yosep and pianist Son Yeol-eum will accompany the orchestra.

Then, after the countdown, the audience will be guided outside to watch fireworks. Tickets range from 30,000 to 100,000 won.

Lotte Concert Hall in southern Seoul has also organized a year-end concert followed by fireworks on New Year’s Eve. The Korean Symphony Orchestra will perform under the baton of Christopher Byung-uk Lee, and will be accompanied by violinist Clara Jumi Kang, soprano Kathleen Kim and tenor Chung Ho-yoon. The musicians will perform works including Pablo de Sarasate’s “Zigeunerweisen” Op. 20, overture of opera “Die Fledermaus” by Johann Strauss II as well as several numbers from Leonard Bernstein’s musical “West Side Story.”

Since the venue is known for having the biggest pipe organ in the country, the program includes organ pieces including Handel’s organ concerto No. 13 in F Major “The Cuckoo and Nightingale.”