When Korean football player Koh Myong-jin first heard that Qatar was going to host the 2022 FIFA World Cup, he had doubts. 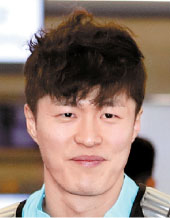 But now, Koh, who joined Qatari team Al Rayyan SC in 2015, thinks the 2022 World Cup could be the best tournament for football fans as he sees progress in the Gulf nation.

“Life here is getting better and better,” Koh told Yonhap News Agency on Monday ahead of training. “I see more hotels and roads getting built as the country prepares for the World Cup.”

Koh said he believes the 2022 World Cup may be the best for fans to enjoy the tournament because of its compact concept of competition venues. Eight stadiums to be used for the 2022 World Cup are within 30 minutes from central Doha, according to the Qatari organizers.

“I think it’s good for fans because they get to see more games,” he said. “You can watch one game and move to another stadium to see another game.”

Koh said that he had worries about hot weather in Qatar, but that since the 2022 World Cup is going to be held between Nov. 21 to Dec. 18, the heat will not be a big problem.

“I first thought it will be tough for fans at stadium, but after hearing that it was going to be staged in winter, I was relieved,” he said. “As you have experienced, weather here in late November and December is great.”

Koh has five caps with the Korean national team, but has never played in major competitions. The 30-year-old last played for Korea in March 2017.

When asked about his chances of playing in the 2022 World Cup in Qatar, Koh said he’ll just work harder.

“When I was young, I had big dreams, but as I get older and enter my 30s, I just think about things that might happen in the near future,” he said. “I haven’t really thought about my career in 2022.”

Koh’s Al Rayyan will get a new home stadium after the 2022 World Cup. The new Al Rayyan Stadium will have 40,000 seats, double the size of their old home, and is expected to be completed by 2019. Once the World Cup is over, half of those seats will be uninstalled and donated to countries in need of football infrastructure.

“My teammates sometimes tell me to stay until we get to play at the new stadium,” he said. “But I’m not sure I’ll be playing here then.”

Koh’s contract with Al Rayyan will end next summer. The midfielder said he will soon talk with the club about his future, but nothing has been decided.

But one thing is sure for Koh: if he decides to return to Korea, his first priority will be playing for his old team, FC Seoul. Koh made his pro debut with FC Seoul in 2003 and played more than 200 matches before moving to Al Rayyan in 2015.

“I did talk with head coach Choi Yong-soo after he returned to the club recently, and he made some jokes that he needs me,” Koh said with a laugh. “FC Seoul will be the first club on my list if I return to Korea, but nothing has been confirmed.”

For the upcoming Asian Cup, which will be held in the United Arab Emirates in January, Koh admitted that he has zero chances of playing at the continental tournament. While other Korean players in Qatar - Nam Tae-hee of Al Duhail and Jung Woo-young of Al Sadd - have been regular picks of Korea head coach Paulo Bento, Koh has yet to earn a national team call up under the new coach.

“If I get an opportunity, of course I want to play, but that’s something that I can’t control,” he said. “There are already lots of good players. I just have to work hard and do my job.”