From zero to hero - the Hwang Ui-jo story

From zero to hero - the Hwang Ui-jo story 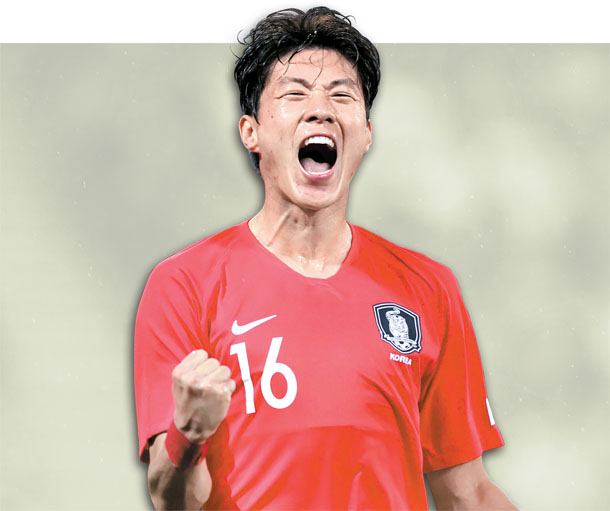 There was uproar in July when Hwang Ui-jo was selected as one of three wild cards to compete at the Asian Games. Korean football fans, unhappy with the inclusion of the relatively unknown striker with an unimpressive record, quickly took to the internet to complain about his inclusion, claiming it was a waste of one of the three all-important bonus spots.

Just five months later, Hwang is the KFA Player of the Year and one of the most popular players on the Taeguk Warriors roster.

Hwang received a total of 218 points to beat out Son Heung-min of Tottenham Hotspur and Jo Hyeon-woo of Daegu FC to win Player of the Year on Tuesday.

Since 2011, the KFA’s Player of the Year award has been dominated by Son and Ki Sung-yueng of Newcastle United. Except for 2015, when Kim Young-kwon won the award, Ki and Son have each won the award three times.

Hwang has been on a dramatic journey this year. Before July, there was probably not a single football fan in Korea that rooted for Hwang. The addition of Hwang - who didn’t even qualify for the 2018 FIFA World Cup - to the Asian Games team was met with disdain, and both the striker and head coach Kim Hak-bum faced their fair share of criticism from fans. At the time, the belief was that Kim added Hwang as a favor to help him earn military exemption.

Hwang did earn that military exemption, but not quite the way that fans originally expected.

By leading Korea to a gold medal finish at the Asian Games, not only did Hwang earn the exemption, but he also became a regular pick for head coach Paulo Bento’s roster.

In addition to the Taeguk Warriors, Hwang proved to be a crucial player for his Japanese league club, Gamba Osaka. Throughout the season, Hwang scored 21 goals to save the team from relegation.

This year, Hwang scored a total of 33 goals.

“By scoring a goal against Germany, Son Heung-min became the historic player of the match,” said Han Joon-hee, a KBS football commentator. “Although Son Heung-min is still the star Korean football player around the world, Hwang Ui-jo is the player that has given the most joy to Korean football fans and the nation this year. Hwang Ui-jo is the key to the success of the Korean national football team, led by head coach Bento.”

Although Hwang is currently training with the national team in Ulsan, he still traveled to Seoul to receive the award.

“I feel that Korean football has gotten hotter in 2018,” Hwang said. “As a player, I feel a bigger responsibility. When I think about the Asian Games, I still feel like it’s a dream and get thrills. [Of the 33 goals,] the goal against Uzbekistan is the most memorable. I always tell myself to score whenever I get a chance. I think my confidence is my motivation.”

Recently, there have been reports that Gamba Osaka has offered Hwang another year as well as a raise in his annual income.

However, there are also reports that German and French clubs have shown interest in Hwang. If he continues to perform well at the Asian Cup in January, it is likely that he will have a lot more options from European clubs.

“I have friends playing in Europe,” Hwang said. “I wish I can be the one to play there some day.”

Head coach Bento will announce his 23-man roster for the upcoming Asian Cup today. The AFC Asian Cup is scheduled to run from Jan. 5 to Feb. 1. Korea is assigned to Group C along with world No. 76 China, No. 114 the Philippines and No. 91 Kyrgyzstan. Korea will start the tournament with a match against the Philippines at Al Maktoum Stadium in Dubai on Jan. 7.

The team is scheduled to depart for the UAE on Sunday and will play a friendly match against Saudi Arabia in Abu Dhabi on Dec. 31.