Kim Sei-young may not have topped the women’s world ranking, but she is considered the most consistent player on the LPGA Tour. 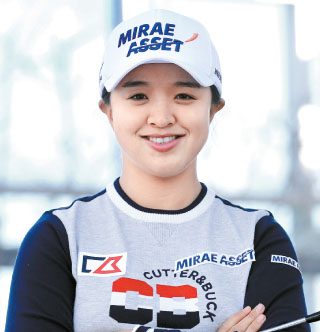 After a successful 2018 season, Kim Sei-young hopes to win a major title in the upcoming season. [CHOI SEUNG-SIK]

Having joined the LPGA Tour in 2015, Kim set a meaningful record in the 2018 season. At the Thornberry Creek LPGA Classic in July, Kim won the tournament at 31 under par. Kim’s four-day score was the lowest 72-hole score and the lowest-to-par score on the Tour.

“Making birdies felt like making pars,” Kim said. “I was even surprised by my shots. After I set the lowest score record, my friends are looking at me differently.”

“I did set the lowest score record, but at the time I was a little disappointed in myself for the last three holes,” Kim said. “To become a better player, I need to improve on that. Throughout the season, I tried to clean up my thoughts in my head.”

Although Kim’s fourth season seems consistent based on the money ranking, she didn’t actually get off to the best start.

Prior to the July tournament, Kim had three top-10 finishes and missed the cut in two of the 14 tournaments she competed in this season.

“I tried to not think about anything when I play,” Kim said. “This allowed me to feel comfortable and I was able to set the record. After, I played well.”

After the tournament, Kim had a strong finish to the season, having five top-10 finishes, including two runner-up finishes.

“Since I was little, I always wanted to play on the LPGA Tour,” Kim said. “When I pictured myself playing on the Tour, I started thinking about making red pants my trademark. I thought fashion and character were important characteristics of a golfer, as well as their performance on the field.”

The 25-year-old golfer made her LPGA Tour debut in 2015 after a successful career on the Korean tour where she won five events. Kim earned her full time status card on the LPGA Tour after finishing tied for ninth at the 2014 LPGA Qualifying Tournament. During her first season on the Tour, Kim won three tournaments to earn the Tour’s Rookie of the Year award.

Following a successful first year, Kim bagged two additional titles in the 2016 season. In 2017 she added another win - the Citibanamex Lorena Ochoa Match Play in Mexico City. However, after winning in May 2017, Kim struggled to add another win until July.

“I’ve watched Park In-bee achieve a career grand slam,” Kim said. “I know how hard and amazing of an achievement it is. So for now, I’ve set my next goal on winning a major tournament.”

In addition to winning a major tournament, Kim also wants to compete at her second Olympics. At the 2016 Rio Olympics, Kim finished tied for 25th.

“To me, the Olympics are just as important as major tournaments,” Kim said. “It’s like another motivation. I’ll work harder to compete at the 2020 Tokyo Olympics.”

“I want to spend another meaningful year next year,” Kim said. “If I have to set my goal, it’ll be to win each of the major tournaments and achieve a grand slam.”